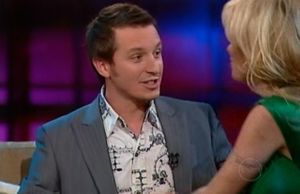 When I moved back here to Australia last year I saw my first episodes of Rove Live, and it thought it was okay. The problem is, aside from a set change the show hasn't progressed at all; in fact the jokes are getting worse and worn out, the skits are just boring, and his interviews make me cringe.

And apparently I'm not the only one fed up with him! Look at some of these quotes from the IMDB article on Rove Live (and no I'm not being biased, about 80% of the people who wrote feel this way):

I’m going to make this long and Moderatly sweet, rove Mcmanus is the worst excuse for a comedian i have seen in my many long years.maybe his show had something when he started but now every Tuesday night he shows us further how sad and poor at being funny a person can be.I think one of his many major folly’s was stealing material from “the Simpson’s” and using it while hosting the ARIA’s, seriously his performance that night was the worst i have ever see, Carson Kressley could have done a better job.His show needs to be canceled before he further embarrasses himself and the foolish goons who voted to award him his ill gotten gold and silver Logie’s.

Rove just doesn’t have things together enough to be host of a nationally televised show. I think Australian audiences can be partly to blame here because the audiences of Rove Live are far too forgiving, if they didn’t laugh at everything slightly humorous that Rove did he might have to actually try to be funny. “Tonight Live with Steve Vizard” and “Denton”, both on Seven, were a lot better than Rove Live just on the strength of their hosts, who were not self-destructive idiots like Rove.

But this one takes the cake:

Rove LIVE’ is, put simply, not funny. At least not beyond the juvenile, stale and repetitive brand of funny that ‘comedians’ such as Adam Sandler and Martin Lawrence endorse. The jokes are lame, Rove himself is pretentious and the show tries too hard to be funny. What is perhaps saddest is that it seems Rove is genuinely amused by his own jokes which are superficial, shallow and not particularly entertaining. Also sad is that with celebrities like Renee Zellweger, he makes seemingly endless innuendo at the two of them getting together in attempt to get a bellow of laughter out of the viewer. I guess he must be succeeding though, because ‘Rove LIVE’ has constantly high ratings. I don’t put this down to the creativity and comedic skills of those involved with the show, however. I put it down to the fact that as audiences are subjected to ‘stupid’ humour (i.e, films such as ‘The Animal’, ‘Joe Dirt’, ‘Scary Movie’, ‘Dude, Where’s My Car?’) more and more regularly, audiences feel that this is the level by which good comedy is measured.

One of the regular segments featured on ‘Rove LIVE’ is entitled “What the?”.

All I have to say, is my thoughts exactly.