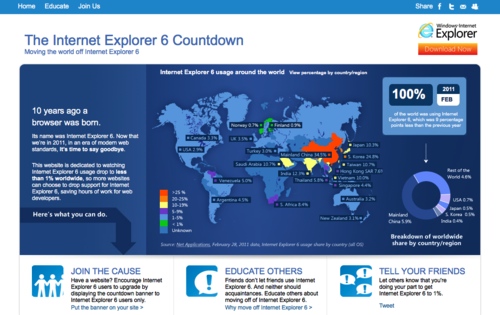 I was going to refrain from talking about this, I really was!

In February, Microsoft launched IE6 Countdown, a site that gauges worldwide use of the archaic browser and encourages users to upgrade to newer versions.

Its been covered to death by Tweeters, Twitterers or whatever it is we’re called, and many people have already voiced their opinions, which means I add a great deal of value by talking about it as well. Right? Don’t answer that.

From a statistical perspective its interesting to see which parts of the world have moved on from the curse that is IE6, and who’s sticking around. Presumably countries like China have higher usage owing to the fact pirated copies of Windows can’t be updated, or at least not easily enough to be done by average people.

It’s certainly an interesting philosophical and security debate, isn’t it? I’m all for free software when their developers adopt FOSS licences, but I’m not for commercial software piracy; theoretically Microsoft has every right to deny unpaid customers their services.

Or do they? See, this logic works in isolation, but when we’re all connected to the same network (Homer told me the Internet is on computers now) compromised machines affect all of us including, ironically, paid Microsoft customers. Botnet zombie Windows machines send most of the world’s spam, they clog our networks, and they further spread worms that would otherwise find themselves harder to propagate.

This IE6 Countdown site serves as much as a testament to the effects of piracy and corporate policy on security than a simple gauge of who’s using a creaky old web browser with giant toolbars.

I sincerely applaud Microsoft for the IE6 Countdown website; people have been using this outdated software for far too long and if anyone can convince people to move off it (other than maybe Google!) it is Microsoft.

It rings a little hollow for me though. When they mention IE6 doesn’t adhere to web standards, the site glosses over the fact it was intentionally designed this way. After Microsoft won the first browser war, IE was left to stagnate. By stifling standards, they were able to stunt the growth of internet applications for half a decade, a convenient coincidence for a purveyor of desktop software.

Much like my American friends are supposed to believe GM are suddenly concerned with the environment only after they ran themselves into the ground with light trucks and SUVs, the site also fails to point out that it wasn’t until competing browsers started strong-arming Microsoft with increasing market share again did they start taking standards more seriously. Forgive some of us for being sceptical of their motives, and for thinking some of the language on their site is a little rich:

Its name was Internet Explorer 6. Now that we’re in 2011, in an era of modern web standards, it’s time to say goodbye.

Finally, despite the assertions of otherwise smart people like Renai LeMay from Delimeter, IE9 still lags inexcusably behind in web standards, to say nothing of the previous versions after IE6, which leads me to my ultimate argument for the site: I believe it should be renamed from IE6 Countdown to IE Countdown. Make no mistake, we would still all benefit from IE not being used at all.

I last mentioned IE9 back in February 2011: Internet Explorer 9 relativity. The gist of that post in two sentences:

Progress is being made, but it still performs relatively poorly in standards tests and still feels like too little too late in my books. A company with Microsoft’s resources should have made this progress years ago.