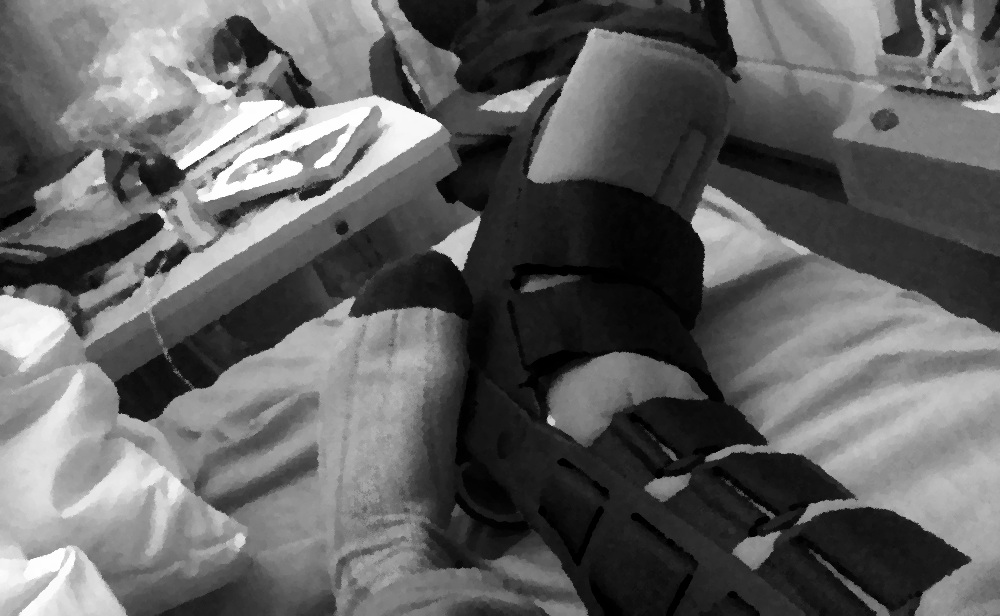 As I walked home late Sunday evening, I stepped on a manhole cover near Hornsby train station. Next thing I knew, I was somewhat shorter than I used to be, and had an “inverted ankle” to prove it. Preliminary reports suggested people in Quito could hear my scream.

The initial pain was horrifying, but after sitting for a short while I felt strong enough to limp home. It was only when I sat in my computer chair and resumed studying for my exams that I noticed the ball on the side of my foot had begun to swell horribly. Even then, it didn’t hurt too much.

At the risk of over-dramatising, I stood up. The equivalent of all the pain I’d ever experienced concentrated itself and shot down to that one point in my foot.

Fortunately my sister Elke was at home, and was able to bundle me up into a taxi and get me to Accident and Emergency at Hornsby Hospital. The taxi driver was a sweetheart, and the overworked nurses, doctors and triage staff couldn’t have been nicer. They all made what turned out to be a horrifying experience that much more bearable.

Elke kept me company in the waiting room in person till 2am, and Clara kept my spirits up on The Twitters with her DMs. As did many of you on Twitter as well, which I really, really appreciated (^_^).

The X-rays showed I chipped of a small piece of bone in my ankle, which proceeded to damage some of the muscle and tendons. When I was a teenager I was involved in a hockey accident which caused a hairline fracture in the same place, no doubt that didn’t help!

What I wasn’t expecting was the equipment I’d get. When I was 14 they put my foot in a cast, but this time the orthopedic surgeon fitted me for a fancy new Cam Walking Boot. Essentially, this boot keeps your foot and ankle locked in position, and transfers your weight away from the heel. I’m still using crutches for now, but the promise is I can use this to walk later in the recovery stage without hurting my foot, pretty sweet! Technological progress is marvelous.

Wanting some sympathy much?

Why post this? For two simple reasons. If you fuck up a part of your body, don’t be all macho and think you can sleep or walk it off. See a doctor, get yourself checked out. You’re not doing yourself any favours if you don’t.

Secondly, I wish they’d had these Cam Walking Boots when I fractured my ankle the first time. The difference in quality of life is indescribable.

And thirdly, whether tongue in cheek or not, many people have suggested I sue the council or the telco who owns the manhole that left me in this state. I’m not after that, but I will be writing a letter to the council to make sure nobody else suffers a similar fate to me. Perhaps at some point I could write a pro-NBN post and discuss how I’ve personally felt the effects of Australia’s crumbling telecommunications infrastructure!

Bother, that was three reasons! Carry on.