Anyway I had a point to this post, and it was regarding some photos I saw from HP today, that company that bought Palm and makes awesome calculators. Check that, used to make awesome calculators… one of my missions in life is to have a real HP-16C, not just use xcalc with the rpn option. Not to diss xcalc with the rpn option, that's still my primary calculation tool, has plety of retro awesomeness and does what I want it to. 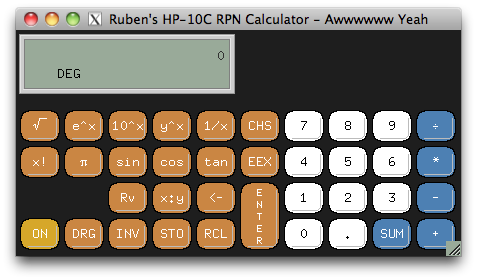 Isn't it amazing what some tapering can do to make a product look slimmer than it actually is? The laptop in the left of the photo above is from HP's press release of their new laptops, and the photo on the right is from their online store. Granted they're not exactly the same model, but every machine in this series employs the same half-height tapering, and by taking a photo of it from above, half the bulk of the case is hidden from view!

Apple and other manufacturers have long since played this visual trick with their laptops and phones, now it seems HP is realising the potential of doing so! I've seen people at uni with EliteBooks, they're absolute monsters, so anything to make them look less messive is probably a good thing… for sales ;).

Whatever the case (see what I did there?) my next portable machine will hopefully be the smallest thing I can get my hands on… that isn't a netbook. An X series ThinkPad or an 11 inch MacBook Air would be schweet.