The internet is all abuzz with the resignation of Mark Hurd from HP Sauces. I don't want to dwell on the circumstances that led to his departure or the health risks posed by the products of a company that make electronic condiments, but rather what the next CEO should do with the company.

First, I suppose its worth mentioning that HP is in a better position than it was when he arrived. Before Fiorina became a scary politician, she steered HP towards purchasing Compaq and for some strange reason selling iPods with the HP logo on them.

I mean, iPods are the gateway drugs to other Apple products not ugly beige Windows boxes, and heavens we all know how terribly slow and crash prone iTunes is on non-Apple hardware! Hey, but at least she could stand on the stage with Gwen Stefani. I wouldn't have minded doing that. No scratch that, I'd rather stand on a stage with Marian Call and Lisa Ono. I'd be their manager, or some other meaningless position that pays well and means I get to talk to them all the time. That'd be awesome.

So what should HP do now? Lots. But in my professional opinion as a socially awkward student and developer who felt fantastic when he figured out how to use the clothes dryer this morning, these three should be given priority.

If something goes wrong, you always need a scapegoat. Fiorina was great for that. The problem was, despite Hurd's management skills he brought his own personal problems. CEOs should be tar and feather free so it's easier to throw corporate failure on them later.

2. Use Palm for… something!

Currently Apple and BlackBerry are the only competent, vertically integrated mobile phone makers. Average consumers don't want to have to deal with Windows Mobile Enterprise Home Premium Phone 7 Corporate Service Pack 3 Release Update 1, nor Android Super Chunky Bacon Fudgy Goodness (that's not available for your device yet despite it being released 9 decades ago), they just want something they can buy, that works perfectly on the hardware and is easy to sync.

They bought Palm, now where are the new WebOS phones and tablets? I wanted a Pre from the beginning for its OS, but couldn't justify buying something that was too slow for it to work. Give us something fast, sleek and a bit more open than Apple. I'd buy one!

Oh yeah, and don't bother with Windows 7 tablets. Nobody bought Windows tablets for a decade, other than those ones Microsoft Pharmaceuticals made for system admins who had to deal with various worm problems. Owies. 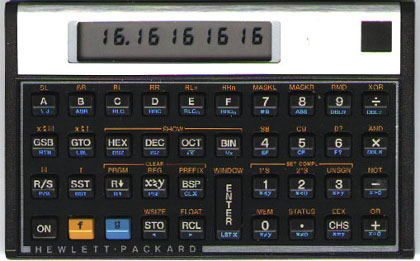 I learned and got used to doing reverse polish notation, and I've always wanted an original HP 16C, but all HP make now are scientific and financial calculators for scientists and financial peoples. The 16C was a work of art, and as such I can't afford to buy one on eBay.

Don't modernise it, don't change the colour scheme, don't swap the metal for plastic, don't "synergise" it with new marketing paradigms or stuff it with WiFi and Bluetooth antennas, just make the original again!

Or better still I can come by your Sydney offices and pick them up. I'm the guy with the Marvin Martian jumper and the K-On! badges on my bag.

I suspected they envisioned greater things for the company than selling crappy laptops. Bring back the old HP R&D powerhouse that used to crank our awesome stuff! Like the HP 16C. That calculator was great.