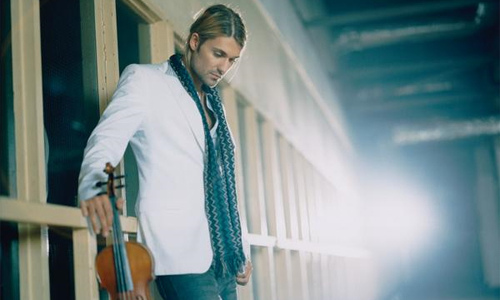 How did David Garrett become one of the world's fastest (and coolest) violinists in the world? The answer may shock and surprise you!

He should do a rendition of Surfin’ Bird

To the story that prompted the writing of post, on the somewhat camelCased Channel NewsAsia:

How do you become one of the fastest violinists in the world?

"Practice," said German virtuoso violinist David Garrett, who once held the Guinness World Record for Fastest Violin Player and has made fusing hit rock songs with classical music his calling card in the music industry. ~ CNA

I've been a huge fan since hearing his rendition of Smooth Criminal. I feared for his safety however, I've seen people rubbing two sticks of wood together to start a fire do it slower. Listen to a few tracks and see for yourself. Well, hear for yourself, unless you're one of those amazing people who can taste colours, and see sound. Rumour has it he doesn't need smoke machines at his performances, and that he typically goes through two hundred and nine bows an hour.

Some of the claims in that paragraph were erroneous

Granted this was written before his record was broken, but this post from Our Three Strand Life summarises his work and even my own emotions pretty darn well well:

Garrett, a 30-year-old German-American classical violinist, began playing at the age of 4, was recording by the age of 13, was the youngest soloist ever at 14 and by 17 was playing world-wide. Not to mention, Garrett is listed in the Guinness Book of World Record as the world’s fastest violinist, playing 13 notes a second. Interested yet?

What sets Garrett apart for me (other than his insane talent of course) is his ability to take both timeless classics and current rock hits and make them brand new. From Beethoven to Metallica, David Garrett plays it all.

And I am loving it.