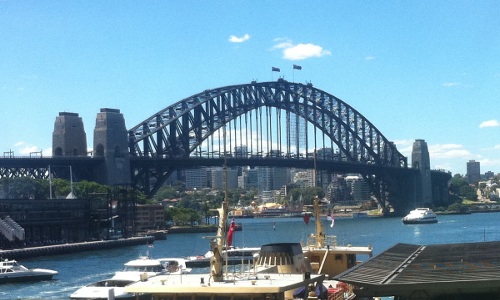 After two months of an uncharacteristically cool summer here in Sydney, the heat finally arrived to exact its revenge for being denied access for so long. I could have just said "it was flipping hot".

It was so hot, the bridge drooped at either end

When we first moved back to Sydney in winter after a 14 year on and off stint in Singapore, we were fully expecting to shiver our rear ends off. We were right, having grown up in a city that has 32 degree weather 365 days a year, temperatures lower than maybe 25 seem practically arctic. Well, for as long as there's still ice there. Ice rhymes with nice.

Anyway we were all excited when summer was around the corner and we could feel some normal weather… well, normal for us. As Einsten said, relativity is a bitch. He never said that. Turns out nature had other plans, and other than a few warm days, most of the summer has been surprisingly cool, especially at night.

I had a wax sculpture of Salvador Dali, but it melted.

Waking up this morning in a lake of my own sweat, I checked the forecast and discovered to my horror and surprise that we were in for a 40 degree day. Yikies!

Yikies is a contraction concatenation Constantinople portmanteau of yikes and owies. I'm thinking it could be a trend. But I digress.

In its infinite wisdom, Google is telling me that 40 degrees Celcius is 104 Fahrenheit. I tell you what my American friends and readers (and enemies), your measurement systems make no sense to me whatsoever, but 104 sure does sounds more evil than 40!

Whatever it was, it was hot. I just got my bike recently and wanted to go for a ride, but the sun was so harsh I could barely stand walking from the train station back to our house. It was so hot, a block of chocolate I'd left on my computer desk had turned into chocolate sauce. It was so hot, my ThinkPad nearly fried itself running Flash. It was so hot, the colour from my iTelephone case started rubbing off on my hand while I held it to take the photos you're seeing here while I was at Circular Quay station. It was so hot. 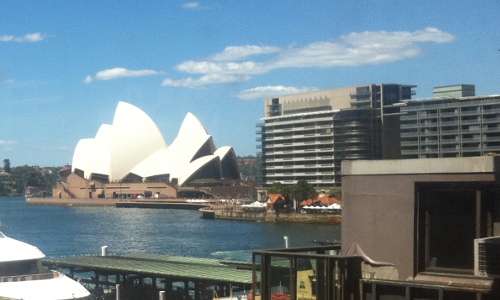 Not to belabour the point, but…

And I still, still say today was hot. I mean really, really, REALLY hot. Even comparability so. That was supposed to be "comparatively" so, stupid autocorrect!If you were in The Australia today, I hope you kept cool. I'm already very cool, you see.

As an update, my fabulous sister Elke just came back from the convenience store down the street. That's none too interesting itself, however she informed me they play the radio at the aforementioned convenience store, and that the station's news reporter just mentioned that Sydney's power demands were ridiculously huge owing to every man and his dog running and air conditioner. No kidding! It may also explain why my screens keep flickering ever so slightly, and why the street lights in Earlwood and neighbouring Kingsgrove are completely out too. Eerie stuff.