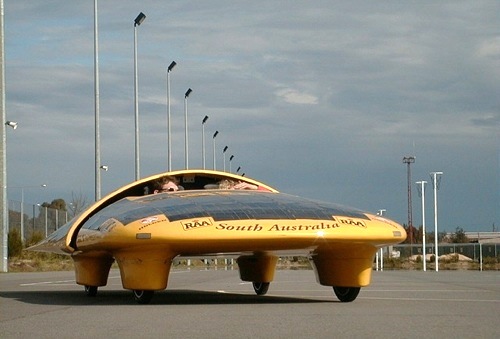 Not that I'm biased against car companies or anything, but I think this latest television advertisement from Holden (Australia's General Motors subsidiary) is pretty terrible, even by their own standards.

In the beginning we're introduced to their new car the Cruze, named as such because cars are automatically cooler if they use single words that aren't spelt properly. After showing us the bog standard four door design they advertise as being "small" along with plenty of stock footage of random people smiling, we're shown a person filling up their tank at a petrol station, then an image of a solar car similar to the one in the photo driving past while the voiceover says:

[The Cruze] uses less fuel, without feeling like you’re driving an experiment.

Yes, heaven forbid a car manufacturer — who's parent's company overseas is declaring bankruptcy because of their failure to satisfy the market — "experiment" with new technologies using alternative sources of energy instead of creating yet another petrol internal combustion engine driven machine! I didn't think it would be possible for a car company to present environmental sensitivity and alternative energy as negatives, but Holden pulled it off.

Despite what Holden is saying in this advertisement, we do need car manufacturers which are forward thinking enough to experiment and to see the impact of their products in the medium to long term rather than just trying to repackage yesterday's technology and ideas into new bodywork and pass it off as real innovation.

Their dismissal of these things pretty much ensures that if I ever need to buy a car in the future, it ain't going to be a Holden. As I say so often about Microsoft for example, I'm sure they have some extraordinarily talented people working for them, I find it quite staggering that this is the best they can do. It may be a backhanded compliment, but what do they say about real friends telling you the truth instead of sucking up by agreeing with everything you say and do?

Excuse me, I'm off for a nice long walk.