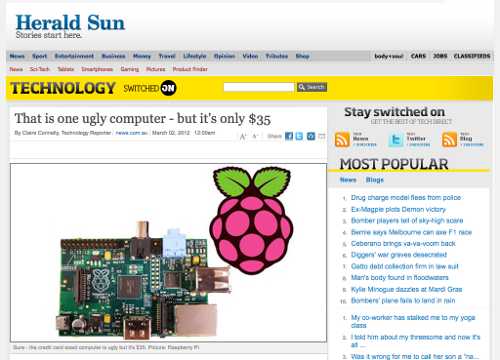 Am having to temporary suspend my Rubenerd.com policy forbidding the linking of Gawker and Murdoch sites, but it's for a good cause!

The back story… story

On the 2nd of March, the following story appeared in the Technology section of Melbourne's Herald Sun online:

I can't say I'm complaining about the design at all. From an engineering perspective it's elegant and clean; the bare essentials you would need to start and run a computer system with specifications you would have needed a gigantic, hulking desktop to achieve in the 1990s. I would have instead latched onto the silly name and equally grating tagline, but that's just me.

The article goes on to discuss the features of this horribly ugly machine:

US technology company Raspberry Pi’s creation lets users program their own computer by giving them all the parts they need – including a wireless mouse, keyboard and an SD card reader.

The Raspberry Pi Foundation has ditched the name Foundation from their name, chipped the ground upon which it stands from the United Kingdom, floated to the United States, and has begun offering free peripherals with their machines. Why was I not told this?

It contains a Linux processor, memory chips and ports for almost every plug in device you could ever need including USB, HDMI and Ethernet cables.

Darn, and I was excited about running NetBSD on a Raspberry Pi, but I suppose if it has a Linux processor I'll have to settle for running it in a Xen session or something.

The tiny computers were initially developed to encourage children to get excited about computer programming and other technology – but the device has gotten the tech world in a frenzy.

We're using the term "gotten" in Australia now? I must not have "got" that message! 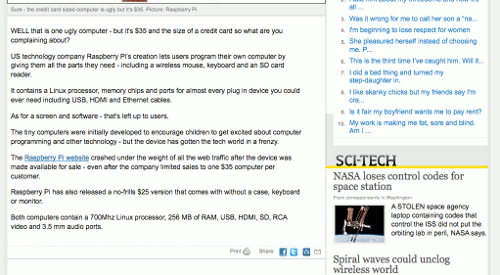 My dry sense of humour sometimes confuses people here, so for the sake of understanding, I was being terribly sarcastic in the above paragraphs. Many of the facts and observations in the article were on target, but some pretty important (and one would think glaringly obvious) ones weren't. For a newspaper, they should have done better, especially considering the story has been developing for months.

On the other hand, and I'm partly guilty here too, but the tech world's moral indignation at the story was also a little out of step. Not to entirely defend this fine Murdoch publication, but probably for the intended audience of the article, it delivered what people who have lives outside IT needed to know: it's a small computer that runs Linux and is ugly. Well okay, the second point was partly true and the third is questionable, but you know what I mean. Right?

No, instead of getting angry at the article as I've clearly just done, what we should be focusing on is their whitewashing of the article from their site entirely. If you visit the article page now, you're given this:

We could not find the page you requested. This is either because: There’s an error in the address or link you have entered in your browser; There’s a technical issue and the page has not been properly published; The article was removed to comply with a legal order; It is an older article that has been removed from the site. If you believe that this is a technical error, please contact us and tell us the location of this page.

A correction has been issued, but the responsible thing to do would have been to preserve the original article, and link to the corrections. Newspaper companies don't routinely go around people's houses, rip out articles from their printed newspapers then issue a correction in the following issue, so why should their online endeavors be any different?

This reminds me of that whole sorry saga with Violet Blue, where recently she removed an image and a rude comment from her news article after it was discovered she'd labelled a women at a stand selling software as a booth babe… when she wasn't. The good news for readers is, you can't delete things from the Internet.