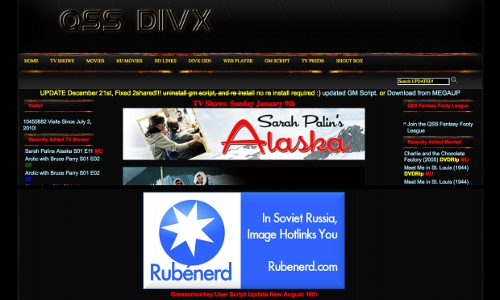 Hotlinking images is a fact of life for most weblog author folks, but instead of just blocking sites that leech obscene amounts of bandwidth, this time I decided to have a little fun ^____^

Each month I go through my server logs and find out all the new sites that are hotlinking my images. In other words, the sites that are requesting material on my servers without any links back to my site here. Leeches. Well, I hesitate to call them leeches, because those little creatures were extremely useful for medical applications and allegedly they're still used as such in some circumstances.

Technically I could just deny any requests from pages hosted outside my own URL (with the exception of RSS readers), but I figure as long as I don't exceed my monthly allocated bandwidth quota at my host, all is fine. I mean, people who stinge bandwidth are inconsiderate, but I suppose in the grand scheme of things they're not doing too much harm, unless they're really abusing it.

Not to be confused with Mr Brown

January 2011 has been going for less than two weeks, and already I have a site wasting more of my bandwidth than a guy accidentally tipping over an entire bag of coffee beans onto the floor. I saw that at Starbucks recently, and was horrified. Think of all those hundreds of cups of happiness that were just ruined! Damn!

In this case, its a video sharing site at http://www.mrbrownee70.com/ who's designers decided to take it upon themselves to use this adorable image for Greasemonkey.

Usually in these circumstances I either rename the file so the offending site has a broken image, but in this case I noticed they didn't specify and width and height anywhere, which allowed me to replace it with a huge banner instead!

It's like free advertising, but free! Well, that was a superfluous sentence ending. I've been doing that a lot lately. I've been eating quite regularly too, but that's not really unusual. I've made it a habit, you could say.

I uploaded the replacement image at 4:10PM, on Saturday the 10th of January 2011. Let's see how long it takes for them to update their page ;)