I saw someone comment on a friend’s thread on FB yesterday that every Olympic event should include one random person selected from the crowd, just for context, and I am 100% here for that.

The Price is Right, but for athletics! Wait, did I just date myself?

That then reminded me of a conversation I was having with Matt of Digitally Downloaded last week, who ranked Olympic sports:

Diving was in my top 5 but then Bouldering debuted this Olympics. Volleyball’s awesome too but Beach Volleyball is better.

I’d only make a couple of small tweaks:

I also second Matt’s enthusiasm with Bouldering becoming an Olympic event. I barely pay attention to sport normally, but I love that the Olympics showcases events that don’t involve kicking a ball. Or if they do, it’d likely be an accident, incredibly painful for the male player, and/or worthy of a penalty.

Which leads us to Beach Volleyball, and probably the briefest anime review I’ve ever done here. I watched Harukana Receive back in 2019 after reading a synopsis by Dee over at The Anime Feminist which gave me an appreciation for the sport I didn’t have before. 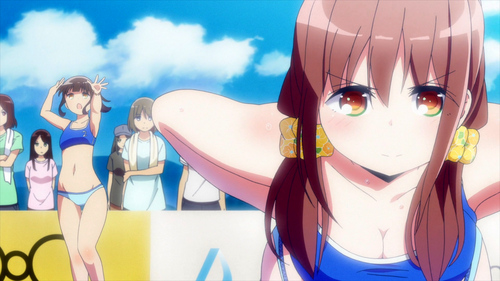 The series takes places around the island of Okinawa (I still find it funny that I want to explore the north of Japan, and Clara keeps wanting to island hop in the south! I’ll bet the weather is warmer). The colours and landscape backdrops are so bright and optimistic, I ended up using some as desktop backgrounds last winter.

Our protagonist Ōzora Haruka is enamoured with a couple of players she spots on the beach. She befriends and wins back a former player with a troubled past in the sport, and they all train together for a tournament over the course of the series. We learn about the rules and strategy in a surprisingly respectful and engaging way, like all good sports anime. The fan service is mild given the subject matter, though I’ll admit I wouldn’t have thrown together that quick montage below at a coffee shop (cough).

I won’t lie (as opposed to other times?), it gave me K-On! does Beach Volleyball vibes, with the same emphasis on friendship and personal growth among a cast of likeable and relatable characters (Haruka gave me serious Yui vibes). Episode 8’s shrine and coffee shop wanderings were my favourite, not that I’m predictable or anything. That’s my second mention of coffee shops in a post nominally about something else. I miss going to coffee shops.

Maybe now I can appreciate the real thing a bit more. Does this also mean I need to watch Iwa-Kakeru! (the first search result for “bouldering anime”) too? There’s really a series for everything. Would the Free! boys consider diving at some point?

This wasn’t among the most disjointed posts I’ve ever written, but it has to be up there. Before the ball reaches the ground.