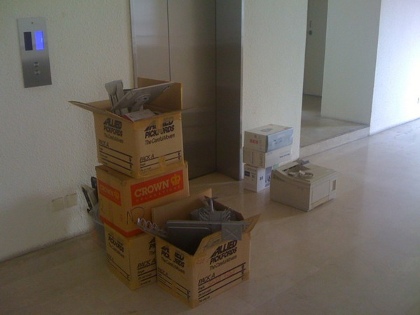 For those of you wondering why my usually verbose stream of consciousness has only resulted in a few blog posts over the last few days, I've been scanning, shredding and backing up thousands of documents for my dad again. We're also taking the time to do a full scale apartment and rented storage cleanout.

If we don't need something, its being:

Our aim is to reduce the amount of stuff we have by half, perhaps even more. For far too long we've been slaves to junk and material possessions we don't need, and we've decided to do something about it.

There's no real Buddhist nirvana motivation behind it, it just makes sense. Less stuff means we don't need to pay for storage, and we can move into a smaller apartment to save rent.

Since my dad started working from home we've had to accommodate business and home stuff under one roof and its started to feel like we're living in a dense jungle of bleached white paper and boxes. Couple that with our family's tendency to hoard everything like frantic hermit crabs and there's a recipe for a really smashing chowder. Sorry, I got distracted by thinking about seafood.

Now that it's been a few years, we're also starting to make some tough decisions about my late mum's possessions as well so we can start to move on. It's really, really hard, far harder than I ever imagined, but we're making progress.