It's that nonsensical idea we thought common sense and overwhelming evidence against its effectiveness would kill once and for all, but here we are on the brink of the introduction of the Great Firewall of Australia. Whooptie-friggen-do.

Mandatory ISP filtering legislation will be introduced around the middle of 2010, after which there will be a one year period to implement and activate the filtering technology.

Also from ZDNet Australia, Colin Ho made similar remarks to what I've been saying about Australia's global standing in his article EFA: Filtering 'damages Australia's reputation'

I've talked about this issue many times before using the nocleanfeed and great australian firewall tags.

In case you're unclear as to what my response has consistently been throughout this debacle, allow me to demonstrate with the help of my friend Kyon from Haruhi Suzumiya fame. 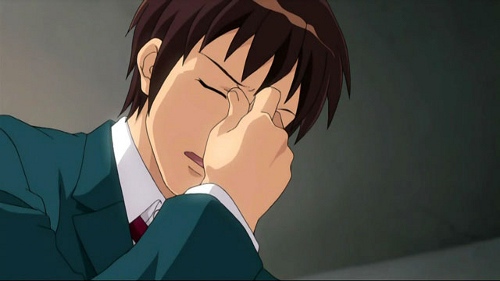