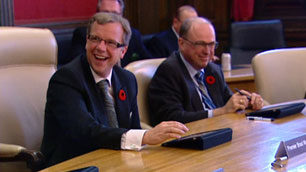 TheNextWeb Canada is reporting that ministers in Saskatchewan (hey, spelled it right the first try!) have started using iPads. They seem almost too excited by their new toys… or at least one of them is!

Don't get me wrong, I love the hardware and think that anything that can reduce costs and improving service is a Good Thing, but I'm wary of governments relying upon one device from one foreign company. As much as it pains me to admit it, in this circumstance I'd probably prefer them using Android tablets. Android isn't entirely free either, and the tablet hardware will be unabashedly and unashamedly cloning the iPad, but it's a start.

According to the Twitters, here in Australia Greens senator Scott Ludlum and Liberal MP Malcolm Turnbull have started using iPads too, but more in a personal capacity.