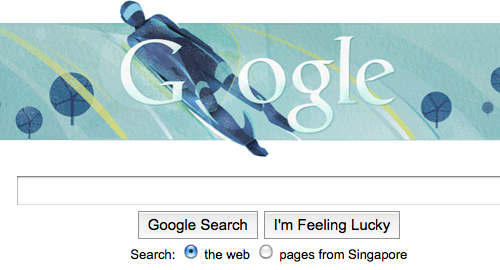 Google's creative and unconventional logos celebrating certain events and milestones throughout the year are fun to watch, but their latest one for Google Singapore shows the local versions of their sites aren't so local!

The current localised Google Singapore logo is the same Vancouver 2010 Winter Olympics logo featured on the primary Google.com site. While it certainly is cheaper to do homogenous worldwide marketing, one would think the local Google Singapore site would have reflected an infinitely more important celebration here and the rest of the Sino world: Chinese New Year.

In terms of value and importance, CNY is the equivalent of every Western holiday rolled into one. I walked along Orchard Road early this afternoon — one of the busiest shopping precincts in South-East Asia — and it was practically deserted. It is HUGE here. No, let me say that properly:

The other thing to keep in mind is Singapore is a tropical country. The temperature barely ever falls below 29 degrees C during the day. People here could barely care less about Winter Olympics, especially during this time of the year.

Something screwy going on?

I hadn't even thought of this, but Dean (@dg01844) on Twitter even suggested an ulterior motive for not putting Chinese New Year graphics on their Singapore site:

@Rubenerd could be a snub given their troubles with China

If that's true, and it could very well be, it's a snub against independent Chinese communities around the world and not just the PRC with whom they've had difficulties. I would be extremely disappointed and quite angry if that were the case.

Anyway some free advice to Google if they're listening: if you're going to operate local versions of sites, you would do yourself a huge favour by celebrating (or even just acknowledging) local holidays and events and not using blanket marketing for sites around the world that some of your customers either don't know or care about.

The weird thing is, I remember seeing Chinese New Year graphics on Google in the past. Again I hope they're not snubbing all Chinese people around the world just because they've had a spat with the PRC, and perhaps on a lesser level I hope they don't really think a Winter Olympics here are somehow more important otherwise I worry about the long term viability of their "local" site!