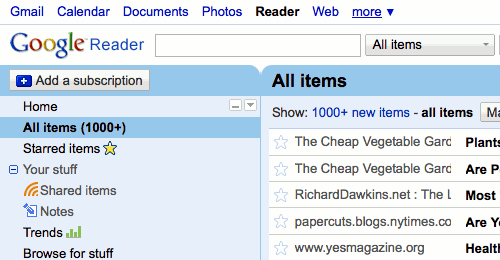 For those of you who are also using the "Google Reader (12/05/2008) Tweaks" Greasemonkey script that makes Google Reader usable again, you may have noticed Google tweaked the interface just enough to break it. It's as if the Reader folks want you to like the new interface regardless! I hope they don't make this a habit.

Fortunately trashrockx has updated the script to remove Blazing White again. Uninstall your current version and update if this has affected you. Don't worry about the date in the name of the script still referring to the 5th of this month, it is an updated script.

Clearly from looking above I have a lot of reading ahead of me. And I'm supposed to be spending this weekend and next week moving gigabytes of accumulated files. Let's see what Atuu says about Wal-Mart first though. We don't have Wal-Mart in Australia or Singapore, what are they? Do they sell pre fabricated house sidings and stuff? Walls? And I was under the impression there were only a limited number of walls you could fabricate depending on what materials they're made out of.