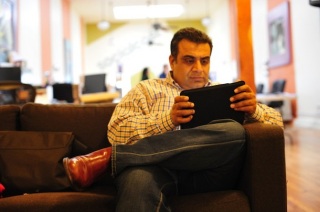 As usual, Om Malik puts it better than anyone else.

Google, thanks to two brilliant engineer-founders, has become a great company seemingly able to solve the world’s most complicated engineering problems. That ability made it turn search into the great money machine that it is. It knows how to tweak machines and make them do unfathomable things. But what it can’t do is internalize empathy. It doesn’t know feelings. It doesn’t comprehend that relationships are more than a mere algorithm. You can see this in its many offerings; they’re efficient, but devoid of emotion, and emotions are what drive interaction. A smile begets a smile, a frown a frown and a conversation a conversation. That’s true in the real world, and it’s true on the web.

No point struggling against what you’re good at

Google is great at trawling through large amounts of data, capitalising on it, and moving on. This is why their search engine usually finds what we're looking for and Gmail is a usable online email service. Unfortunately, this engineer oriented corporate culture doesn't lend itself to creating more organic sites such as social networks and wikis (remember Knol?).

Not all problems can be solved with cold algorithms and a bank of computers.

I think one can draw a parallel to Android as well. The Apple iOS may be overtly restrictive, but was clearly the result of people fed up with the previous phone status quo and wanted to create something people would want to use. Android was developed to get more people using Google's banks of computers.

I trialled a Motorola Milestone and the difference in the Little Things were startling. Of course, engineers scoff at such notions because they're intangible, and its for that reason Google is struggling to break out of its rut.

Basically, Google does reactionary well, revolutionary less well. Nothing wrong with that from a business perspective as long as it keeps bringing in the dough, but as Microsoft's repeated failed attempts in the consumer space have shown, overcoming corporate culture is a dang hard thing to do.