Checking my junk mail account on Sunday, I was reminded of Google Buzz's impending demise. Enclosed for your consideration is a typically Rubenerd-esque longwinded story, complete with some more technical notes.

Clicking the link in my Gmail profile thing, I was directed to Google Takeout, a service that sounds like I'm taking a quantum physics hard drive out for dinner, but in fact is a service launched by the Data Liberation Front.

This is similar to what Pownce did in 2008 when they realised adding a few token features to a cloned version of Twitter wasn't panning out, and they decided to shut down. The difference here is that Google's Takeout worked, I tried exporting my Pownce profiles dozens of times before giving up. Oh well, everything I had there was just a reposted from Twitter anyway.

Choosing "Buzz" from their worryingly large list of options gave me a link to download my 25MB Buzz archive with 5,654 files.

I've poked gentle fun at Google a lot lately for their litany of discarded and failed social networks, but I'll miss Google Buzz. Not for it's initially terrible privacy concerns or because I used it directly, but for what it did diligently in the background archiving my content from around the web.

Perhaps you used it in the same way, but I had Google Buzz configured to repost all my Google Reader shared items, Friendfeed posts (remember that site?) and tweets, amongst other things. When accessing Gmail using POP (cue the IMAPers!), I realised these items were suddenly being flown to me, emailed if you will. By bees.

I set up a quick filter in my local honeycomb store that is Thunderbird, and suddenly I had a nice archive right here on my local machine of all my content from around the web. Pretty sweet stuff I must say.

This background nectar gathering service was probably not what Google had in mind when they launched it, but it was nevertheless useful, not to mention rather tasty. Oh well, back to subscribing to RSS feeds directly. 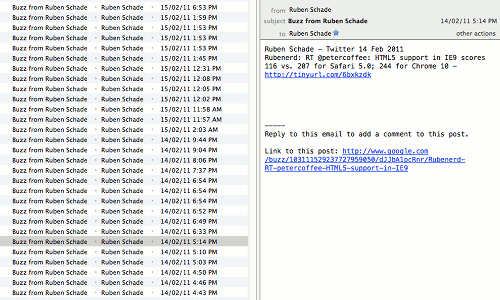