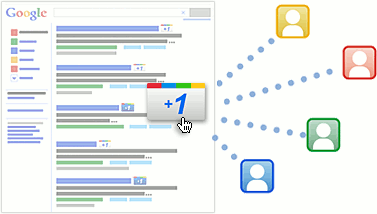 So Google is integrating Google+ into Google. I suppose I should be worried about this, but I'm not!

I’m surprised that others are

When the news first broke, and the subsequent juvenile shouting match ensued, I'll admit I was more surprised that some people were surprised, rather than being surprised about the news itself. That sentence, plus my introduction claiming Google is integrating Google+ into Google borders on Inception.

To even any casual observer, it should have been obvious that Google would inform their search results with Google+ at some point. Sarcasm aside, why else would an internet advertising company launch such a service? Ditto the +1 button.

The problem for Google is more and more information is being found through people rather than algorithms, and traditionally their strength has overwhelmingly been in the latter. Facebook is arguably leading this charge (go figure), and Twitter is not too far behind. In Japan, they're ahead.

Google figures they can merge Google+ and searches together, and deliver personalised search results. They've been tailoring results to people who don't opt out of their non-DNT respecting tracking for some time now, but this just takes it to the next level.

Of course, this introduces some serious anti-trust questions, which Eric Schmidt has either dismissed or pointed to Twitter's rel="nofollow" stance; the former of which is a little disturbing and the latter is misdirection, as far as I'm concerned. Danny Sullivan and MG Siegler would seem to agree. Apparently the blinkers are firmly installed on enough people though, read Google's response on Google+ for the comments… if you dare!

Bascically, there are three reasons why I'm not [so] concerned.

People are already spelling the end of other social networks because Google+ has unfair placement, like most Google products as Ben Endelman painstakingly points out. I'm a little optimistic that they'll see the error in their ways, realise what a PR mess they've created and reverse course. They've done this many times, Google Buzz's privacy fiacso probably being the most well known example.

Secondly, as to the anti-trust whatnot specifically, I'm also not too concerned. If Internet Explorer couldn't compel an overwhelming share of the English speaking world to Bing, Soapbox and the like, I doubt people will start leaving their Facebook accounts in droves just because they see some extra stuff in their Google sidebar.

Finally, it's often said the main thing protecting us from government abuses isn't oversight, but incompetence on their part. I don't think Google is incompetent, but for now the utter irrelevance of Google+ for anyone other than the Robert Scobles of the net will keep this problem at bay.