COVID has unfortunately made retail and restaurant closures seem inevitable, but I missed that Singaporean DIY outlet Home-Fix shut down in December last year. Tiffany Fumiko Tay wrote for the Straits Times:

Once a familiar name in many a Singapore shopping mall—and with more than 20 outlets at its peak—home-grown hardware chain Home-Fix will be shutting its last store here by the end of the week.

Among the challenges that the do-it-yourself (DIY) chain had to grapple with were high mall rentals, competition from e-commerce and neighbourhood stores that sell the same wares at lower prices and a sluggish economy.

We lived for a period of time in Balmoral Park, which was walking distance from their Tanglin Mall store pictured in the article. The staff was friendly and knowlegable, and the invariably had exactly what we needed despite its small size. But I have to be honest and admit I’m not surprised that online shopping snuffed them out.

Jalelah Abu Baker wrote for Channel NewsAsia that the stores were looking to reinvent themselves. But six months later, the Home-Fix’s website still just has a landing page, and the footer says it’s “under judicial management”. 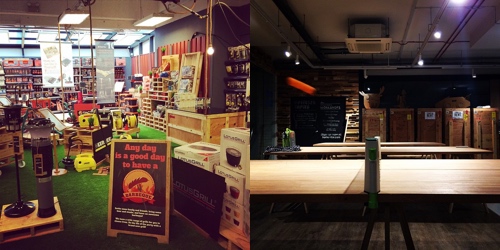 Singapore doesn’t have as much of a DIY culture as in other countries, though I noticed an uptick in interest just before we moved. Australia has Bunnings Warehouse which has become a cultural institution, and the US has hardware stores large enough to host Olympic events. Even Malaysia has branches of ACE Hardware that my dad and I used to spend hours wandering around in Mutiara Damansara.

I’m not sure if it’s still around either, but my other favourite hardware store in the area was in Shaw Centre. I used to go there so often when I built custom computers, I got to calling the owners uncle and auntie. Lovely people.

The inline photo was from Home-Fix’s dormant Instagram page. I wonder how many abandoned company social media accounts will be formed over the next year.