The Linux Journal shut its doors one again, which breaks my heart. Kyle quoted his earlier farewell from 2017:

Ultimately, we couldn’t keep the lights on. Linux Journal announced that it was shutting down on December 1, 2017. I followed up that announcement with an emotional farewell of my own. If you read that farewell, you’ll see that somewhere in the middle it changed from a memoir into a manifesto. My sadness at seeing something I had worked on for ten years going away was replaced by anger that the Linux community had seemed to lose its way. I lost my way. I took Linux and FOSS for granted. It became clearer than ever to me that while Linux and FOSS had won the battle over the tech giants a decade before, new ones had taken their place in the meantime, and we were letting them win. 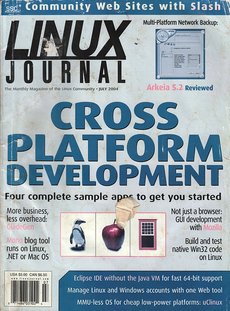 I remember buying the LJ at the cavernous Borders and Kunokuniya in Singapore, the former being another icon that has ceased to exist. I learned more from LJ and Linux Format out of the UK than I did from any textbook or class. For years I thought it was above my technical ability, but even in those formative years I found their guides and explanations fascinating and thoroughly well written.

Despite the name, their journalists were also a valuable source of BSD and general *nix information going back decades. I can’t remember which article or issue it was for certain that first made me more aware of FreeBSD as a then-NetBSD user; I feel it was something about ports.

Sadness about the loss of a great publication aside, Kyle also touches on an important broader point. What guts me is that the infocomm industry, as a whole, is awash with cash. More people are reading online content than ever before, demonstrating there’s interest and a potential market. And yet journalism around the world, not least LJ, is faltering.

There’s a line of reasoning out there that journalism being able to count on advertising was a happy accident, so IT companies that took their lunch owe them nothing. I’m iffy about that last point, but even if I wasn’t, surely journalism is a sufficiently worthy project to continue supporting? If you gut what we all understand to be a critically important industry, not just for democracy but for a healthy and well functioning society, what do you expect to happen?

At the risk of sounding melodramatic, this keeps me up at night. We’re going to have to get used to populism and other creeping nastiness if we don’t fucking figure this out; that’s what’s at stake.

I subscribe and pay for a dozen electronic newspapers and magazines a month, but just as charity is no substitute for social security, we need it to scale for it to make any meaningful impact. I’ll admit though, I’m not sure what the answer is.