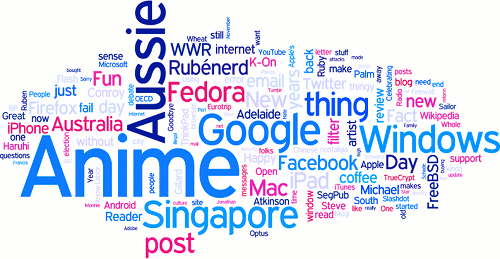 At the end of each year, I like to make a Wordle out of all the post headings. And this year I'm adding other stuff too, all of which is entirely pointless and not worth reading. Like a phonebook in 2010. Hey, see what I did there?

Certainly only judging what I talked about from just the heading doesn't take into account the length or quality of the posts, but still interesting nonetheless.

Apparently I talked a lot about anime this year, which is surprising because I really didn't think I did! And for someone who only uses the OS in a virtual machine on his Mac and *nix machines, I sure talked about Windows a lot ;). I guess its no surprise I mentioned Singapore and Australia in a lot of entries. And finally, while not a huge topic, Whole Wheat Radio (WWR) will never be mentioned that much ever again owing to the site's closure.

I don't know why, but I never really got what the big deal about new years was. In our current accepted calendar system, its just the passing of one unit of time and the beginning of another! Still, here's a look back at 2010.

University, work, finances, health, extended family woes. I won't depress us by dwelling on them. Suffice to say, here's looking at 2011 for a reprieve from all that!

Happy New Year, if you're into that sort of stuff. Personally I don't know why we're celebrating, the year of the rabbit doesn't start until February.