Been having a pretty dreadful few weeks what with all my mum's scary medical stuff, but one thing has happened recently that has lifted my spirits again: I got a new FujiFilm S9600 digital camera… again! 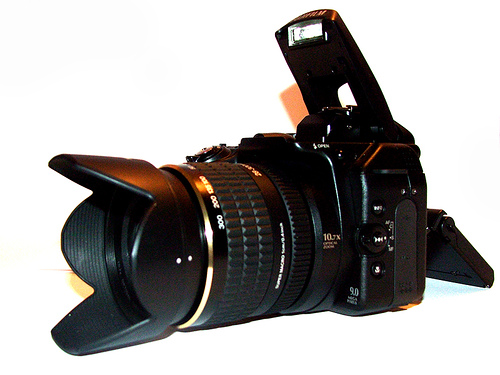 Okay granted I already had this camera back in March when I got it for a birthday present from my dad, but it was stolen while I was having coffee in KLCC in Malaysia. This time around I'm taking some extra precautions:

It's amazing though how when you lose something you learn how much you took it for granted. In this case after losing the first S9600 I went back to my tiny Lumix and just couldn't take it! Get it? Couldn't take it? Get it? Taking pictures with a camera? Oh come on that was a quality joke.

It's pretty late at night here and I was desperate to find a good subject to take a picture of that wouldn't involve me hanging out the window and arousing suspicion about possible intentions I may or may not be possessing late at night with a camera with a very high optical zoom. I focused on the lamp on the other side of the room, set it to manual focus and…

Okay it's not perfect, but I've only had this camera for a few hours (and I had the last one for less than a week) and I have much to learn about image composition (cutting images into thirds and so forth), and it was the first shot, and it is in a lower quality JPEG form because I'm tired and just wanted it to upload quickly, so please be kind: 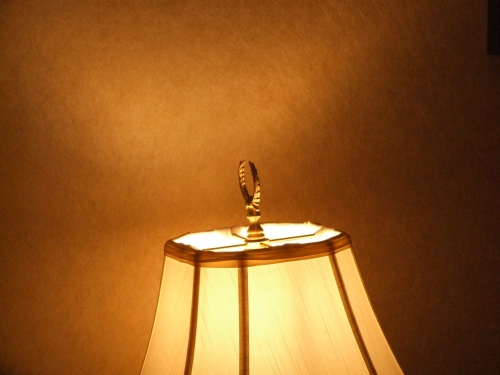 I just really liked the way the light was being cast on the wallpaper in one direction which highlighted the texture of it, and the detail on the top of the lamp itself.

I guess the ironic thing is having now bought two of these cameras, my whole initial argument that I couldn't afford a true entry-level DSLR with a lens the same as the S9600 was pretty pointless, because I could have bought one with the amount of money we spent to get two of these! Aiyo.