With my ongoing efforts to learn about BSD (as opposed to Linux) and adapt it for use as a low cost workstation OS (which I have been very impressed with so far!), I've been using Parallels Desktop on my MacBook Pro to test various releases, including the flag, the DragonFly and the Pufferfish which as far as I can tell so far work flawlessly and just as fast as they do on a regular PC, which I guess is largely what the latest Intel macs are ;).

Been having some issues running FreeBSD 6.1 and the FreeBSD 6.2 release candidates though which is a real bummer :(. Upon booting FreeBSD from either a full CD ISO image, from the Boot ISO image or even from the hard disk (virtual machines I had set up in the 1970 build of Parallels previously) I receive the same string of errors: 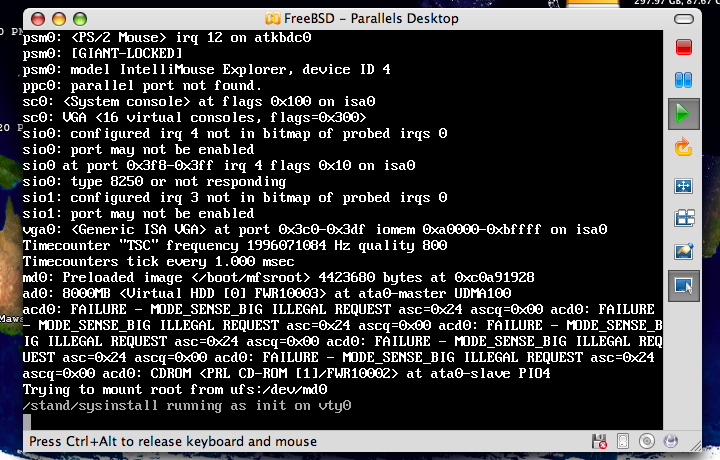 Again this seems to be isolated to the FreeBSD (and the FreeBSD based PC-BSD distro) 6.x series on the Parallels 3036 Beta build. The official 1970 release still works fine.

Fortunately after a few minutes looking around the Parallels Forum many others have had the same problem, so it's not just my machine stuffing up. Then again, had the error been on my machine I could have fixed it I guess.

Hope Parallels addresses this issues ASAP; in the meantime I'll have to stick with build 1970. Bummer :(