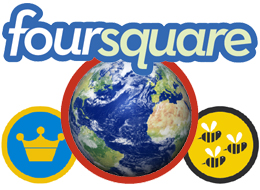 Previously when people would ask me on Twitter whether I used Gowalla or Foursquare I'd reply with Gowalla because Foursquare wasn't available in Singapore or Australia when I started, and now that I have all my locations on there I may as well keep using it. Now it seems I finally have a concrete reason to keep using Gowalla:

On the heels of the Foursquare-Bravo TV deal, news of several additional major media partnerships involving the location-based social networking app have dropped this evening.

According to various reports, Zagat, Warner Bros., HBO, the History Channel and ExploreChicago have all been added to Foursquare’s media and entertainment mix.

First reaction: oh well, sellouts! Second reaction: doesn't this just further cement Foursquare's reputation as a site that puts the US #1 and the rest of the world on the backburner? I'm assuming these "media partnerships" are America centric. Third reaction: the linked news report on Mashable only had glowing, positive comments? That's a bit suspect.

Anyway I've decided now more than ever to keep using Gowalla, even if their parent company's homepage is so full of saccharine sweet marketing speak I needed to skull three dozen espressos in rapid succession after reading it!