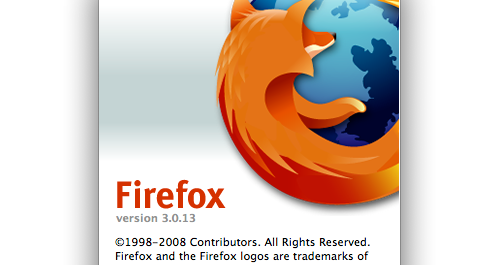 After posting a few weeks ago about how I'd downgraded back from the Firefox 3.5.x series to Firefox 3.0.13 because of serious stability problems I've been overwhelmed by the feedback I've got from people here on the blog and through Twitter and email saying they've had the same problems. Not since I started using Phoenix 0.2 when I was in high school have I ever had to downgrade Mozilla software, it really is that bad.

The problem is Mozilla has (possibly intentionally) made it difficult to locate the downloads for the 3.0.x series which is still being maintained and supported. I admit when I gave up and decided to downgrade I used a copy of 3.0.6 I still had on an external drive then used its internal software update feature to bring me up to 3.0.13.

Fortunately since then I found my ISP here in Adelaide has a globally accessible mirror for Firefox 3.0.13 which you can find here:

I think it's safe to say the 3.5.x series is still beta quality software and should be treated as such, meaning when I advise people about what software they should use on production machines I'll be strongly suggesting they use 3.0.x.