My good friend Felix had started his own Tumblr weblog which looks really slick and is full of random good stuff!

ASIDE: I almost typed the word friend as fiend: would have meant something slightly different!

ASIDE: I’m currently listening to Bette Davis Eyes by Kim Carnes. As I typed in Tumblr, she sang “she’ll take a TUMBLE on you!” If that isn’t a synchronicity, then I’m a mozzarella ball. 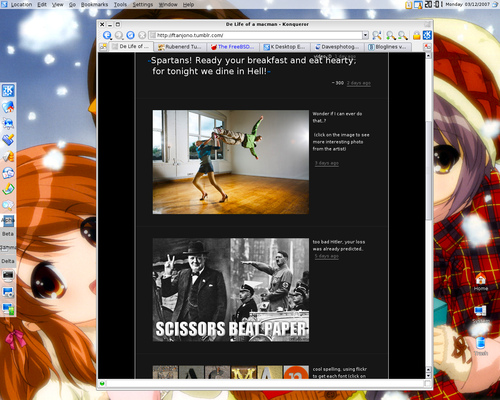 I thought if Tumblr was good enough to meet Felix's quite stringent standards I figured I might as well give it a shot myself. As I eventually found out with services like del.icio.us, Flickr, Twitter and Truemors, I don't feel as though I have much of a use for it now, but it might grow on me. Actually come to think of it then, maybe I shouldn't start another addiction!

From the Tumblr Help page:

To make a simple analogy: If blogs are journals, tumblelogs are scrapbooks.

You can also look at tumblelogs as slightly more structured blogs that make it easier, faster, and more fun to post and share stuff you find or create.

For the time being I've just got my own Tumblr literally posting directly from my Flickr, del.icio.us, Rubenerd Show and Rubenerd Blog web feeds. I also post random quotes that I find, because one line posts wouldn't really be that appropriate on a site like this, plus doggone it I really like quotes. 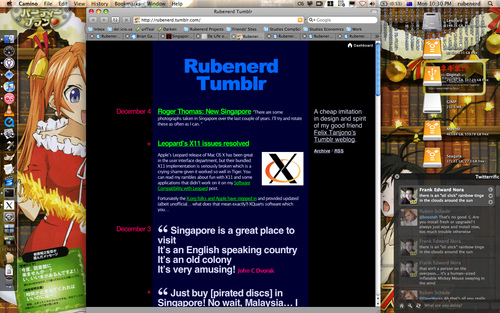 If you're using a screen reader or text based browser, the description in the picture above is:

A cheap imitation in design and spirit of my good friend Felix Tanjono’s Tumblr weblog!

My Tumblr can be found at rubenerd.tumblr.com, and Felix's is at ftanjono.tumblr.com.