It's sure been a month of anniversaries and milestones, for better or worse. Here's one that I feel compelled (and able) to discuss in more detail, the last revenue passenger flights of the Singapore Airlines 747.

From Asian Skies on Flight Global:

After nearly four decades of successful operations, Singapore Airlines is about to retire its last remaining Boeing 747s from passenger service. The Boeing 747 has been an icon of Singapore Airlines’ fleet since a pair Boeing 747-200s first landed at Paya Lebar Airport on the 3rd of September of 1973.

Since that date the Singaporean flag carrier has operated several variants of the Jumbo jet, adding its first Boeing 747-300 in May 1983 and later on the 747-400. Its first international Boeing 747-400 service, from Singapore to London, was flown on 31st May of 1989.

According to the site, the type's final scheduled flight will be from Singapore to Melborune and back on the 25th and 26th of March, and that cargo 747 operations will continue. In other worse, unless we're crew on a freighter, no more SIA 747 service for us! 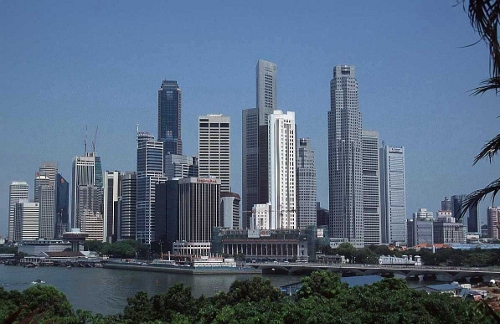 Photo of Singapore in 1998 from here, of all places. It's sure changed a lot since! :O

With the possible exception of Concorde, few airframes are as instantly recognisable to the general public as the Boeing 747. With its forward upper deck (FUD, to you non-IT people) and large wings, it was the first commercial widebody passenger jetliner, and became a household name. We started referring to things by comparing them to the size of a 747.

For my sister and I though, the Singapore Airlines 747 fleet will always hold a special place in our hearts and minds, as it were. Boarding our flight from Brisbane in the mid 1990s, it was the first part of Singapore we saw having been told our father's job was transferring us there.

Aside from transferring us away from Australia and forever changing our perceptions of life, the universe and everything (as well as firmly cementing my obsession with Asian culture, food, history, language, people and living!), at the time what we were most excited about were our seats. My father's company had shouted us business class tickets, which meant we got to sit "upstairs"! Compared to the gigantic cabin downstairs with its rows of cattle class seats and noise, the top section felt cozy. It was small, had few seats, and was tiny!

As my sister said:

That’s one of the few flights I do remember… which is weird!

Ironically enough, with my father being transferred back to Australia recently and my sister and I being accepted into UTS, our last flight back from Singapore to Sydney on Singapore Airlines was on one of their brand new A380s, the very plane that most likely lead to the retirement of their 747s. Funny how the world works like that.

Anyway, another aspect of our childhoods flying away. Which reminds me, something else from our childhoods had a massive anniversary recently, I'll need to blog about that soon too!