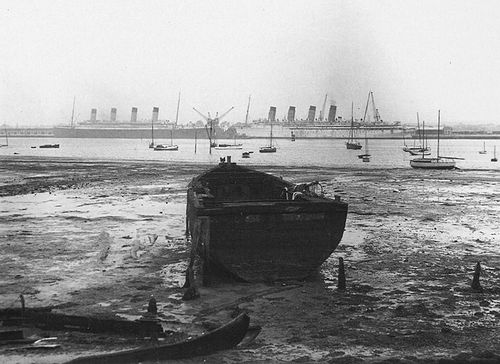 Photo is of the RMS Olympic and the RMS Mauretania after their last voyages in 1935, from MaritimeQuest.com.

It's official folks, after pioneering the concept of a downloadable radio show before the term podcast even existed and producing shows for longer than anybody else I can see, Frank Edward Nora's The Overnightscape and The Rampler* programmes have been indefinitely suspended.

I want to do a proper tribute show on the Rubenerd Show to Frank and his incredible efforts spanning most of this decade, but I'm still having severe troubles with feedback with my crappy audio setup here since I came back to Adelaide and I want to do it right, so it'll have to wait.

In the meantime I want to wish Frank all the best in his *new Rampler endeavours at the WFMU radio station and The Overnightscape Underground. Frank is the most engaging and intensely fascinating individual I've ever heard speak, and I'm looking forward to hearing him on his new projects.