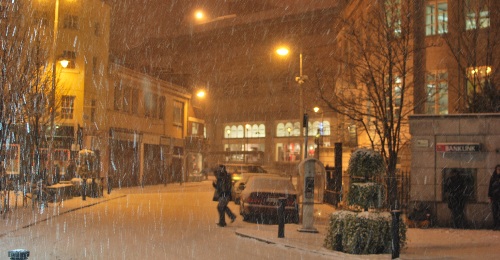 So let me get this straight, because honest taxpayers like Neal O'Carroll have been so generous in shouldering the burden imposed by the bankers that got them into this economic mess… the bankers are getting an investment.

(Photo was taken by me during our Europe trip in 2010. Random street in Dublin during a snow storm, with a bank ATM to the side. Kinda made sense given the subject matter!)

At least it’s not Moodys

(Reuters) – Positive news from Ireland is prompting a growing number of investors to look at the troubled euro zone economy, said billionaire Wilbur Ross, who this week invested 300 million euros in its largest lender.

Billionaires know all! After all, it wasn't billionaires that got us into this mess.

Ross said the deal was fueled by positive news from Ireland [..] These include the government’s announcement it was ahead of target to bring its budget deficit under control, lack of protest against a harsh austerity program, and the European Union’s decision this month to ease the terms of an 85-billion-euro international bailout.

The power of accurate observation…

In any event, nothing says fair like giving the people at the helm a bailout, then demanding the middle class repay it in the form of reduced services and higher taxes. I looked up the word "austerity" in the thesaurus, and the word "fair" was right there.

Oh but wait, we haven't got to the truly fabulous bit yet!

A key development was a euro zone deal that eases the terms of Ireland’s bailout and positive comments from the International Monetary Fund that Ireland’s program is on track, assuring investors that Ireland had virtually guaranteed funding through 2013.

Ah, the IMF. So the economic hit men got what they wanted. Does that mean they can take their plundered riches and leave my Irish friends alone now?

Ending on a positive note

Although Ireland is mid-way through an unprecedented eight-year cycle of austerity, social unrest is almost non-existent and unlike Greece and Portugal, Ireland is expected to return to growth this year because of a vibrant export sector and the flexibility of its economy.

So there you have it. As long as the Irish can continue to be as creative and resourceful as they've always been, their economy will eventually pick up again from the mess the bankers got them into, and said bankers will be there to profit from them once more.

Have a Guinness on me guys and girls!