We’ve heard for years that the PC market is doomed, relegated to the dust bin of history thanks to an explosion in the growth of phones and tablets. The latter didn’t really come to pass, but there’s no denying that for a significant and growing slice of the population, their phone is either their primary or only computing device.

It’s a bittersweet inflection point for me as a fan and heavy user of desktop computing since my early childhood, and it raises serious privacy concerns considering the company behind the most widely-deployed mobile OS, and their actions far eclipsing what Microsoft did to warrant anti-trust lawsuits. But it’s the economic reality in 2019.

But there was another factor at play I hadn’t considered: people were holding off buying new machines so they wouldn’t need to upgrade from Windows 7. Microsoft hasn’t made their desire to kick people off the OS a secret: first with its free upgrades to Windows 10, then forcing it through Windows Update without permission, and now by deprecating support for newer chipsets.

But people are seeing it as an opportunity. Simon Sharwood reported for CRN Australia:

“Demand is there,” Gartner principal analyst Lillian Tay told CRN. “The end of Windows 7 support in 2020 and the push to modern PCs has businesses ready to spend.” …Microsoft’s efforts to make Windows 10 and Office 365 perform best on newer PCs are paying off, she added.

Appreciate for a second what a backhanded compliment to Windows 10 this is. People are buying new computers again because they held out for so long to run what they’d prefer.

Don’t get me wrong, I didn’t like Windows 7. It was a hodgepodge of different interfaces, ClearType made Linux fonts look good, and the Aero Glass UI was chintzy. It earned significant popular press because it wasn’t Vista, and now people hold onto it because of what Windows 10 is.

I have a helper Windows VM around for when I need to run specific work tools. I thought I’d jump on board with Windows 10 and see what all the talk was about. Microsoft has earned nerd cred of late with Azure and VS Code, so I figured it must be alright: 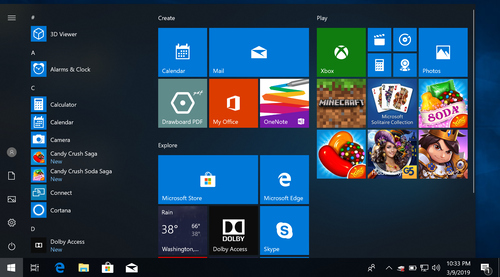 Wow. No wonder people wanted to stick with Windows 7. Some things never change, even after a decade.