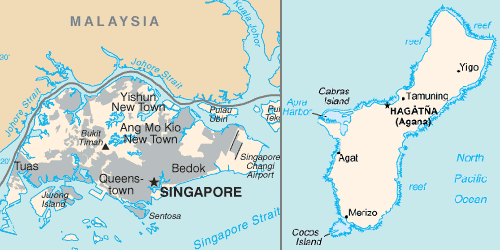 This isn't a technology related story, but then again Avatar had a lot of fancy CGI depicting floating mountain things and this is about something just as plausible in the real world. Emphasis added by me:

Hank Johnson, Georgia’s Congressman, stated during a committee meeting that the addition of more U.S. troops to the tiny island of Guam might cause the island to tip over and capsize. When the news first ran the story, many thought it might be an April Fools Day prank, but watching the video, all concerned were all business and Johnson was very seriously laying his case for the island.

As that senator said too Bill Maher in Religious: "you don't have to pass an IQ test to serve in government!". No kidding.

At 541km^2, Guam is only a fraction smaller than Singapore which manages to support just under five million people in 710.2km^2, and last time I checked it ain't sinking! That said, there is that joke in Malaysia that if Singaporeans keep building massively tall buildings and cramming more people into it eventually it'll drift away and sink. I suppose that's the difference, the Malaysians are kidding!

I hear Sarah Palin wants Hank Johnson on her ticket for the presidential elections of 2011 or whenever the are, you-betcha!