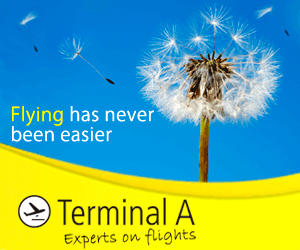 I'm typing this post from a small café next to our hotel in Dublin and boy it's freezing! There's snow lightly falling outside and the footpaths are slick with ice which has caused more than a few bruises in the last few days, but we've still been thoroughly enjoying ourselves! Anyway I was going to save blogging until I got back to Singapore, but I couldn't resist when I saw the above ad.

Yes, having just logged into the free WiFi at said coffee establishment, I was presented with the above advertisement which, if you care, looks almost like a square but is in fact a stumpy rectangle. A pointless and utterly stupid observation about size is not the humerous part of this yarn though, I found it to be pretty ironic this free WiFi hotspot is sponsored by Dublin Airport with the slogan "flying has never been easier" given its closed due to the freak Arctic weather conditions! Then again I can't seem to access Twitter tweets on it anyway, so perhaps saying the two are alike was intentional. Makes sense.

We'll be back in Singapore in a few days, can't believe we've been in Europe now for over two weeks. WiFi has been very hard to find so I gave up the prospect for live blogging, so instead I'll be uploading photos and blogging about places upon our returny substances. Return-y substances?

I've been informed the above graphic, had I cared to click on it, is for an airport in the UK and is in fact not Dublin. Must be all the Guinness :). Given many of the airports in the UK are closed too the point of the post still seems to stand though!

Neither can I now that I'm using Firefox again. Perhaps Adblock Plus attacked it!