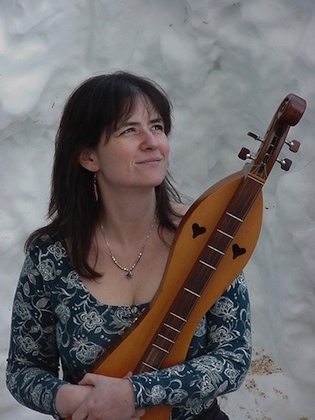 Sorry, I got caught in an infinite loop. It's a mental condition, I'm having it checked out. If you're not aware by now (isn't that a Simply Red song?), Esther is releasing a new follow-up album to Unfinished Houses which I've loved and in a more personal way has got me through some tough and challenging times in my life to say the least.

It was 2 years ago that I released Unfinished Houses and began to immerse myself in the life of a traveling singer-songwriter. It’s been great. Thank you all for your support and enthusiasm, whether you are fan, venue, house concert host, ‘WheatHead’, press, radio, fellow musician, family or friend.

So, two years later, I have an exciting announcement. I have in my hands a brand new CD, ready to go out into the world. It’s called Aurora Borealis: Conversations with Alaska’s Northern Lights. You can listen to samples and purchase pre-release copies directly from my website.

Snow Leopard got me in the mood for preordering stuff, so I've gone ahead and preordered my own copy of Aurora Borealis. If it's even a tenth as enjoyable as Unfinished Houses was I'll feel as though I got my money's worth :).

Amongst many of her stunning artistic abilities, my beautiful late mummy was a woodwind, keyboard, harp and dulcimer player, and Esther's voice, mannerisms and style of music remind me so much of her it brings back tears sometimes, but more often than not it makes me smile. At the risk of sounding overly cheesy and nostalgic, it's like having a small part of my mum kept alive in spirit whenever I listen to Esther's music.

Also as a matter of disclosure for legal reasons my solicitors have advised me to inform you all that Esther did not pay me for this post, though I wouldn't be adverse to her doing so later at her discretion if she chose to ;). Or anyone else for that matter. Terimah Kassih.