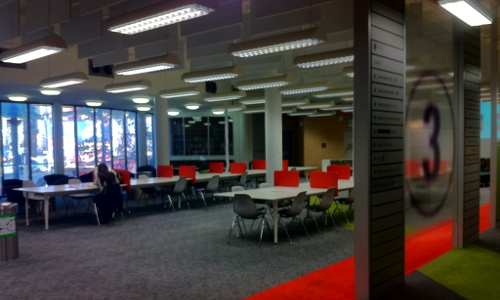 It's fascinating how the exact same space can feel so different simply with fewer people!

It was just over a month ago now when I ventured into my university's inner city library to work on several group assignments. We'd met up several weekends in a row, filled up with coffee from the stand downstairs, and converted caffeine to code and UML. Despite being a "library", it was buzzing with activity, so much so that often we had trouble locating desks to sit at! Packed, noisy, hot, and with internet slower than a busted toaster oven.

Fast forward to now. Given the weather in Sydney over the last few days, I can only assume our local ancient phone exchange was flooded again, rendering our home internet as reliable as a toaster oven door built with slabs of cheese. Where in the hell are theses analogies come from? I was already in town attending various banking duties, so I figured I'd afford myself the use of the university's wireless, and head to the library for a few hours.

Entering the building, the first thing I became aware of was I could still hear the sound of podcast chatter coming through my headphones. It was… quiet. Really, really quiet! As I identified myself to the gate machines with a swipe of my student ID card thingy, I noticed most of the desks were empty. There were computers free. Books were on shelves, not on tables.

Going upstairs and sitting in my favourite couch by the window I used to sit at before I had friends (shaddup!), it struck me just how empty the place was. The people didn't make much of a difference, it was more the complete absence of sound. It was eerie.

Of course, none of this is unexpected, with exams and the semester winding down and with most people heading out for holidays and such, clearly most people weren't as nerdy as me and thought they'd spend a couple of hours there just hanging out! Maybe the [very!] recent memory of all the brain cramming and 11th hour assignment work scared the rest off.

Whatever the case, I've always been fascinated with giant spaces with no people. Maybe it appeals to the introvert in me, but abandoned buildings, or buildings at odd times without occupants… there's just something profoundly different about them that can't just be explained as being an absence of people. Like school during the holidays, or offices on Sundays.

There's something else about empty places that usually have people. And I have no idea what it is.