Normally I wouldn't blog about such stuff, but with the sudden reversal of Sydney's weather, it seems inventions like this might be a great idea for those with more fashion taste than common sense.

While sneezing my arse off from an impending flu this morning, I was reading The Guardian. For those not in the know, while also being the technical term for a legal caregiver, as well as a chain of highly successful Singaporean pharmacies (erroneously referred ton as Chemists in Australia), The Guardian is also a British newspaper that has an excellently designed site. Not that I'd usually know, for I read their RSS feeds, or Atom feeds, or whatever feeds they have.

Isn't it funny we still call them newspapers even when they're online? I suppose one could print them to keep the term from becoming archaic. But I digress

What should appear on the sidebar than an offer for Mighty Ice Grips:

Certainly, the thought that most preoccupies me is being stuck inside given I can't wear my high heels in snow. But what would they most be useful for?

Ideal for emergencies, walking to work in snow or ice, or shopping.

But of course! Nothing says stylish practicality and emergency preparedness like high heels in snow. 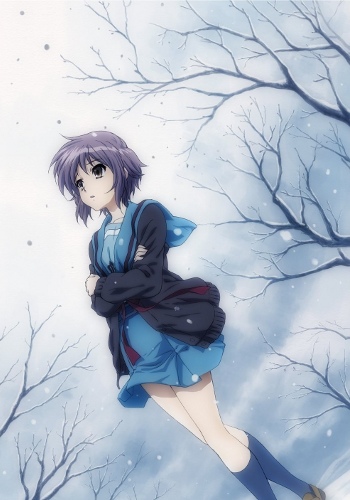 Ah Yuki, as a computerised entity I would have thought you'd have more common sense than to wear such garb in those conditions. Even Haruhi and Mikuru realised sometimes you need longer socks. But I digress.

My head hurts. Not from the content of this post, but from this flu. Perhaps it's time to make like a pair of ice shoes and skate. Hah, get it? I thought it was funny.