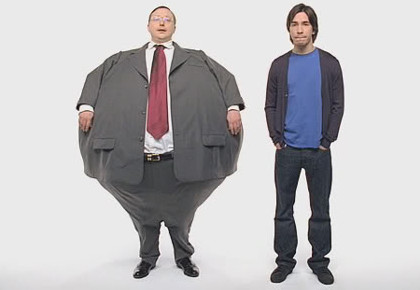 Checking out ZDNet I was redirected to an article by Ed Bott who dismisses many of the woes with Windows as being the fault of its antitrust lawsuit. Yeah, damn those big government people trying to break up an unethical corporation!

It was 10 years ago this week that Judge Thomas Penfield Jackson issued his final judgment in U.S. versus Microsoft. Two months earlier, after almost two years of legal proceedings, the judge found that Microsoft had illegally abused its monopoly in the operating system market [..]

So, ten years later, with the gift of hindsight, how did that settlement work out? [..] Here are four significant developments that affect all PC users and in my opinion can be traced directly back to the antitrust case and its settlement.

Ed then proceeded to list a bunch of reasons why Windows is still terrible to use, but provided only tenuous reasons why they have anything to do with DOJ court decisions. Had he not mentioned the word "antitrust" in his report, it could have just been passed off as a critique of Windows in general, me thinks.

Crapware isn’t the fault of the free market! Oh, wait

While Ed delights in thanking the judge for all the crapware installed on Windows machines, he fails to point out the scourge existed long before Microsoft was deemed to have abused their monopoly, and he doesn't touch on the primary reason.

Unlike Apple which sells a cohesive and markably different product (which you may or may not like), hardware manufacturers were all selling the same Wintel whatnot and needed a way to differentiate themselves. Being clueless, this meant they bundled their own awful CD burning software, media players and rheems of nasty trialware, then replaced a base Windows install CD with a restore disc that meant you couldn't even wipe it clean with a fresh install. Of course, such manufacturers also get nice kickbacks from those software vendors for inconveniencing their users like that. 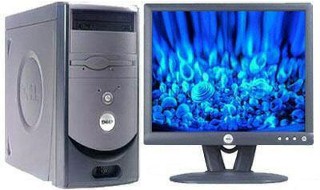 Pointless nostalgia moment: I remember my otherwise beautiful little Sony VAIO PictureBook machine in 2000 had so much crapware I saved half it's drive space by buying a retail copy of Windows 2000 and wiping Me and its crapware off it entirely. I couldn't run Red Hat Linux on it because it didn't detect the then-revolutionary webcam. Anyway I wouldn't touch a Sony product with a ten-foot pole now, not least because of their rootkit shenanigans and from this previous crapware experience.

It's similar to what we're seeing with Android handset makers now; HTC's UI and bundled software are different from other Android makers simply so people are given motivation to buy their products over others. The result is a level of imposed fragmentation that simply doesn't exist on a products made by Apple (or the late Palm), nor the chosen fragmentation from a true FOSS system such a FreeBSD or your Linus distribution of choce where the users choose exactly what they want and not a third party. But that's for another post!

Anyway I'm just a anxious blogger who gets paid in donated cups of coffee, and Ed Bott has the following humble description added to each of his stories; and judging from some of the titles of his other recent articles you can tell he's not into sensationalism ;). 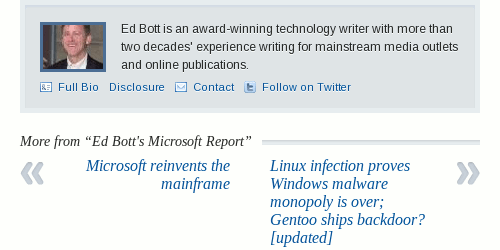