Given previous OS X upgrade experience, I decided to hold off from upgrading to Lion until 10.7.1 was released this time around. Alas, despite doing this there are still several issues severe enough to warrant me downgrading back to Snow Leopard until they're addressed.

So what are they?

1. Lion has been the first release of Mac OS X where my machine has been noticeably slower since upgrading. Applications take fewer “dock bounces” to launch, but more time. Scrolling is sluggish and key repeat rates are slower. Most maddening of all though are context menus: the current record is a whopping six seconds before they appear after a mouse click. OS/2 Warp 4.5 running on my 120MHz Toshiba Libretto displays menus faster than my Mac Pro with Lion does.

2. The Finder doesn't seem to have a memory leak, but it routinely chews up 70 to 90% of a single CPU core on idle. Killing it or force quitting drastically speeds up the machine, though only temporarily.

3. I have custom icons for my mounted volumes and drives so I can see at a glance which I'm working with. Lion's Finder sidebar replaces these with uniform drive icons in the same monochrome style as iTunes 10. From a glance, individual drives are now indistinguishable.

4. While I can appreciate Apple’s intention to make automatic backups and revision control easier for people, technically proficient users already have their own tools for this, and the lack of an option to disable this is frustrating. I suspect its responsible for some of the reduced performance and greater hard drive utilisation.

5. Related to this new feature, the removal of the one-step "Save As" and replacing it with the two-step "Duplicate" then "Save" function is one of the most maddening changes I’ve ever encountered in an OS upgrade. It was driving me so crazy, I gave up using Lion’s built in applications such as Preview and TextEdit entirely, and wrote symbolic links to redirect to other applications should I accidentally launch them! 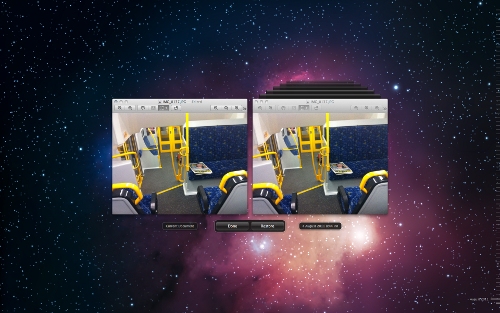 6. After Mac OS pioneered the commercial GUI with a simple resize handle in the bottom corner of windows to change their size, Lion finally caught the all-edges-resize disease. It’s visually distracting having cursors constantly changing as I move them across the screen, and it increases the chance of changing windows by accident. To me, this was more of a feature to appease Windows-switchers than something useful, though I suppose I could get used to it. In KDE I overcame it by having all my windows full screen by default ;).

7. DigitalColor Meter.app only shows decimal RGB now, not hex. Why remove this?

One of the good things about Apple on the desktop is they tend to listen to our concerns. When Leopard came out, they quickly headed our cries for folder icons in our stacks, and opaque menu bars. There's nothing here that can't be fixed, provided we all keep giving them feedback. Not that it helped for some of these features given we voiced our concerns before the GM, but still…

In the meantime, it's back to Snow Leopard for me until at least the performance and reliability issues are addressed. 10.7.4 perhaps?