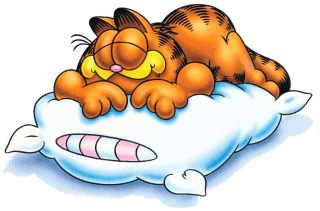 Garfield has the right idea… again…

Another night, another case of insomnia. In this case it's 03:00 and I'm still not only wide awake, but clearly possessing the energy needed in order to not only climb out of bed, but to sit myself in front of a computer, take that inital blast of blazing light as I turn the monitor on, and start typing a blog post.

It's funny that more often than not for me I don't have trouble sleeping when I have a huge problem or obstacle to overcome in life, but rather when I have hundreds of smaller problems. They seem to build up exponentially at times to the point where I can be propped up in bed and my thoughts are running together faster than a relay team. Sorry for the crappy comparison, but you try to be witty at 03:04.

Why has my bank said the rent has been paid but my landlord says it hasn't? Why hasn't that package from Japan arrived yet? Do I want to live permanently here or back in Australia? Would super capacitors run hotter and therefore need more cooling than a traditional battery? Why am I always so nervous? How could there be plants at the centre of the earth according to the "Journey to the Centre of the Earth" movie if there's no sunlight? Where are my keys? Should I give up on this long hair experiment and have it all cut off when it's taken over 4 years to get this far? Is OpenBSD really that much slower than FreeBSD and NetBSD in real life even if benchmarks say that is in certain circumstances? Why do I still expect to see mummy at some point?

Is that it? I hope so. Why do I want to learn German, Dutch, Swedish and Japanese of all things? German makes sense, my dad and half my family are, and Dutch might be somewhat similar to German, but why Swedish and Japanese? Why does mess accumulate so fast? If the bed frame I'm sleeping on broke at an angle, would I slide off the bed, crash through the window behind me and fall 7 floors? Does my medical insurance cover falling out of my bed… from 7 floors up? Why do I worry about worrying as much as I worry about the problems themselves? Who decided that toothpaste should be minty in flavour and that mints are fresh? Why do I worry about not having too much of a social life if I prefer that lifestyle? Why is concentrating on your breathing in order to drown out distractions so simple in principal but so hard to actually do?

Can you order home delivered sleep? You know what, that generated too many negative images, had I been more awake I would have been alert to that before I had typed it. I would have also realised that I could have just as easily used the backspace key and deleted that line instead of trying to explain why normally I wouldn't have written such stuff here.

Not sure if this is helping me sleep or not. Perhaps I should dust off an old copy of Learning Microsoft Visual C++ 6.0 and read it. Ah no, alas with me boredom doesn't make me tired, it just makes me feel bored. Perhaps a silly anime series? Nah, I don't have the energy to laugh, and I'd have to read subtitles. Quick walk around the block? Nah, I'm too tired. Aha, problem solved.

I will get the hang of this sleeping business eventually, I might lose some sleep over trying to figure it out though.