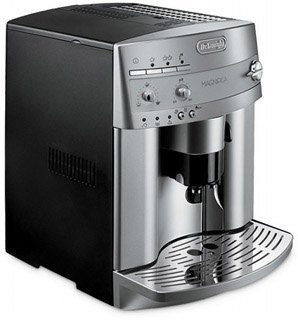 I've been so busy catching up and doing fun stuff on my trip back to Singapore I haven't blogged as much in the last few days, though given my overarching verbosity you probably all think that's a good thing :). In this post I regale you not with a tale of software or technology but with a coffee machine brought back from the dead!

Okay so it turns out it wasn't really dead after all, but when our DéLonghi Magnifica one touch espresso machine started making loud rattling noises whenever I tried to brew a cup, it sounded like there was a gunfight erupting in our kitchen, a severe problem when one considers Singapore's tough gun laws.

When the shock of not being able to brew a cuppa subsided my dad and I took the malfunctioning device to the Kenwood service centre in the Centro Bianco Building. Kenwood are the official servicing mob for DéLonghi hardware in Singapore, makes perfect sense, right?

I made the silly observation that in Adelaide Bianco is the name of a construction equipment supplier, in Singapore it's where you go to get your coffee machines and kitchen appliances fixed. Heh heh ^_^.

After presenting the loud unit over to the technician he proceeded to test it by pouring some beans in, topping up the water and brewing a cup, with the same loud rattling sounds. Rather than doing what I did and hurriedly pressing the off switch because I was worried the unit was damaging itself, he let it run and started brewing a second cup. The noises slowly disintegrated (I could have thought of a better word to put there) and coffee started coming out again!

Turns out the loud grinding rattling sounds were to do with air being trapped in the water pump, and when enough water had been forced through it started working again. Too easy!