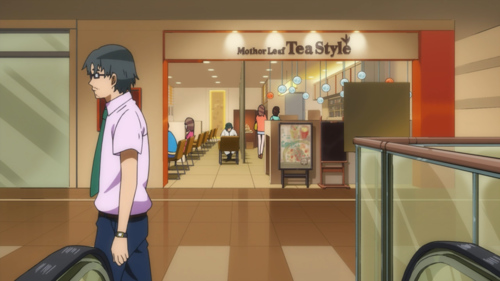 As usual, I’ve let my anime reviews pile up like steamed mackerel on pineapple pizza. Rather than feeling guilty about catching up, I’m just going to write a spur-of-the-moment post about my first impressions of GATCH-A-MAN! Crowds, the series Clara and I watched last night, and my friends Sebastian and Vadim have talked incessently about. 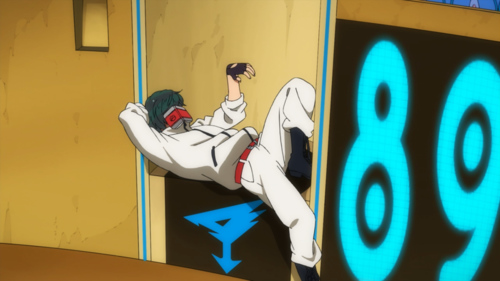 I’m an IT guy, so we begin with the technology. Their NOTE book things they use to communite with other memebers of their elite, exclusive team remind me of the Selecao phones from Eden of the East. Now that I think about it, a lot of the series does, though with less male nudity. 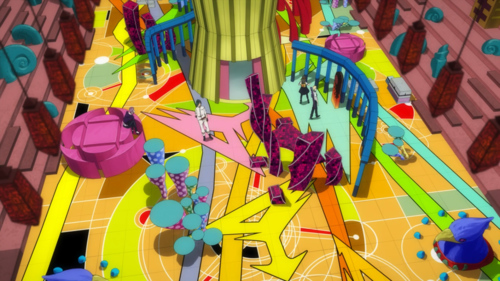 The eerie headquarters of the GATCH-A-MEN! on Earth remind me of that world the Princess of the Crystal takes her unwitting victims in Mawaru Penguindrum, or some of the dream spaces from Yumekui Merry, or even Madoka Magica. Naturally, lots of colours and busts of giant words birds serve to make the headquarters more efficient. 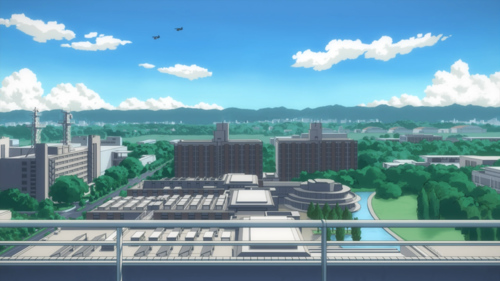 When the first episode started and I saw all this lovely scenery pr0n, I thought Railgun. Speaking of which, I need to watch S2. Actually, there’s quite a lot I want to watch from this season; its unusual that I want to watch more than one show from each season, but we’re full on this time around! 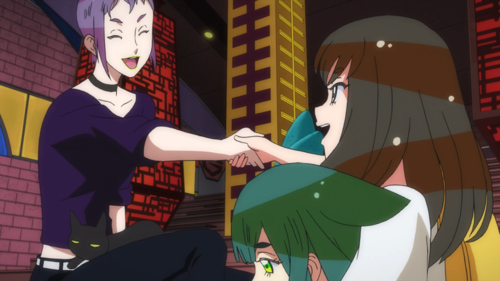 Hmm, the characters. To be honest, I have no idea. They all remind me of something, but I honestly can’t figure out what. Or who. Perhaps the artist or director had a role in something I’ve seen, but as an otaku approaching his late 20s my memory isn’t what she used to be. I do know O.D. reminded me a little of Fire Emblem from Tiger and Bunny, though he’ll have to be pretty wonderful to match him. I’m already liking his attire. 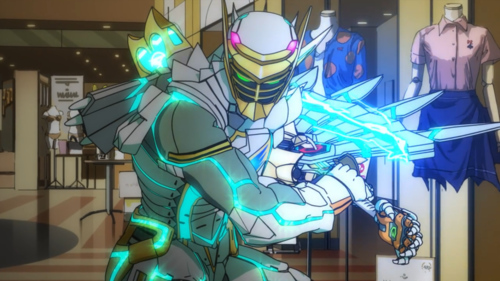 Speaking of which, the transformation costumes: Tiger and Bunny. Right down to the head gear with rabbit ears. I’m so cut that I didn’t see his voice actor at SMASH! 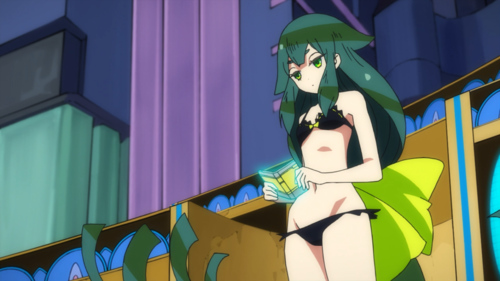 After rolling my eyes during the OP, I noticed how much of a clone Utsu-tsu is of Lum Invader from the 1980s, right down to her hair style, hair colour and attire. Given the original GATCH-A-MAN! screened in the 1970s, I’m going to pretend this was the animators paying homage to classic anime again; it’ll make watching it easier.

And finally, the harvesting. Of course, the NOTE was extracted from Hajime’s chest; whether it be Penguindrum, or Guilty Crown or any other recent series, the chest cavity seems to be the new Hammerspace. The NOTE being the soul of the GATCH-A-MAN! sounds like a Grief Seed to me. No wait, what was the positive version of that from Madoka Magica?

I’ll admit, I’m on the fence. Free! and WataMote are drowning in their epicness (and Neptunia is so delightfully inexplicable), so naturally Clara and I will be watching them to the end. I’ll give GATCH-A-MAN! an episode or two more to see if it can hook me.

What I will say though, its great to see some of this classic stuff come back again. I remember seeing the legendary G logo at the Japanese Club in Singapore when I was growing up; perhaps they had an employee who was a fan of the original. I loved that the music and GATCH-A-MAN! jingles harkened back to the original 1970s series, while still being fresh and new. I also love the bold colours and eerie familiarity I feel I have for a series I’ve never seen before. The seiyuu for the lead character is extremely talented, though suffice to say I’m not really a fan of the character she’s portraying so far!

We’ll see how this pans out.