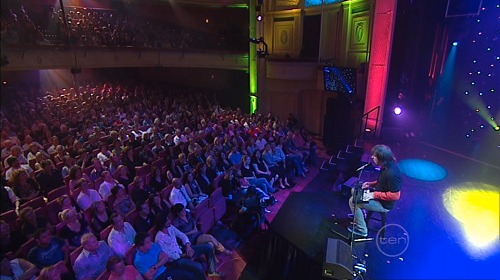 I don't believe in synchronicities to the extent where two spookily related things are purposefully crashed into each other with some form of supreme power for my own bewilderment and amazement, but what I do know is coincidences scare the begeebuses out of me, if begeebuses were something tangible and they were previously inside of me. I think I'll stop that imagery right there.

In this case the TV tuner in my Mac was blaring out the sound of David O'Doherty performing at the Melbourne Comedy Festival during his 20 things that piss him off from 2009 or something segment, and just as I arrived home he arrived at Twitter on his list:

"Twitter!"
I have no idea what the point of Twitter is. It’s like an idiot megaphone shouting out benalitites of your own life. I made an omelette today. Oh really, who cares, your only friends are sitting at their computers.

I listened to some of the other things on his list (blue lights under car chassis, stupid government advisory ads that don’t do anything!) that generated laughter and applause from the audience, but I thought it was interesting that his Twitter jab fell completely flat.

It was so quiet you could hear a punchline drop

Did it fall flat because there were so many people on Twitter as they were watching the performance? Hah, I’m not that deluded :). But I do have a theory!

Don’t get me wrong, there are plenty of vacuous, inane, self absorbed people on Twitter and I poke fun at them all the time myself (TMZ lolz!) but poking fun at all of Twitter by saying its just people talking about grilled cheese sandwiches just isn’t funny. Not because it may or may not be true, but because that gem of a witty barb has been used, reused, recycled, twisted around, refitted for new clothes and spat out by every single half baked comedian who’s waved a mouse at a computer screen for five minutes, scratched their head and has been given a microphone since the service started!

It’s only observational comedy when you joke about something that hasn’t already been observed by thousands of other people already. What’s next, a joke about Britney Spears or aeroplane food? Come on David, less of this predictable, boring stuff and more Very Mild Superpowers, at least with that routine I was able to chuckle once.

I know he was only doing it to get some laughs, but it also really surprises me that someone in his position isn’t checking out Twitter at all. If he doesn’t get it that’s fine, there are plenty of independent artists like the awesome Marian Call and even the illustriously fabulous Stephen Fry who have seemingly figured out how to connect with fans by typing 140 character messages.

I know, it’s Earth shattering stuff… as George W. Bush would say, you’d have to be one of them rocket surgeons to get that!

As a matter of disclosure, I am a Twitter user, but I’d have probably had the same second hand embarrassment if he’d made the same kind of worn out joke about MySpace.

"MySpace!"
I have no idea what the point of MySpace is. It’s like the back page of a seedy magazine offering suggestive services under innocent sounding names. Hi, my name is Sunshine. Oh really, what do you really do?

Of course! But that's the great thing about having a website like this, nobody was forced to pay for any of my material here before they read it ;).