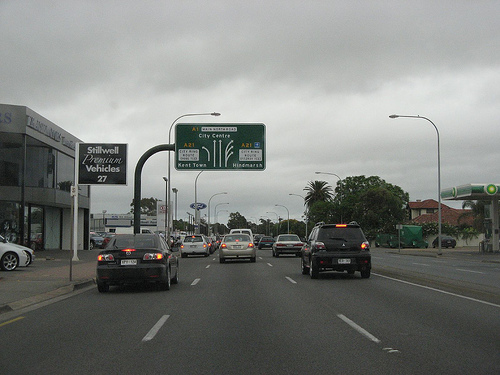 Photo of Adelaide traffic above by Cold Citrus on Flickr.

Todd Tyrtle shared an interesting article on Google Reader this morning about the myth of cyclists causing more accidents than motorists. I've always thought the claim was dubious.

While there is a public perception that cyclists are usually the cause of accidents between cars and bikes, an analysis of Toronto police collision reports shows otherwise: The most common type of crash in this study involved a motorist entering an intersection and either failing to stop properly…

As someone who lives most of his life as a pedestrian and public transport taker I can completely believe this. The number of times I've been clipped by cars and have almost been run over when I have the green light at a pedestrian crossing just isn't funny any more. Well, it was never funny but you get the idea. I look both ways when crossing the street, but cars are much faster than my reflexes and I am. What also irritates me is how often people don't indicate when they're turning; it only takes a tiny flick of the wrist for the driver but apparently that's too much effort for most. This is true in both Adelaide and Singapore.

The problem for people like me and bike riders like Todd is we're expected to put up with lousy drivers because cars are an "entitlement" when they should be seen as a privilege, and as such bear a certain level of responsibility. Demerit points don't discourage reckless driving because they just punish actions rather than dealing with the underlying entitlement problem which I think is endemic to our society, much like binge drinking. I could get onto the selfishness of drunk drivers, but I've decided to keep that Pandora's box closed!

There are some people who legitimately need cars, but that shouldn't excuse everyone from having one and driving them inconsiderately. Safe drivers as well as bike riders and pedestrians are affected by such people.