I was preparing my personal HP MicroServer for a fresh install of FreeBSD, like all good sysadmins do on days off. This entailed creating a bootable FreeBSD USB key installer. I had a spare 32 GiB USB 2.0 SanDisk Extreme which I figured would do the job, but for some reason I couldn’t only copy 64 MiB [sic] of data to it before writes to it fell off a cliff.

Here it is accepting a disk image copy on my FreeBSD tower. I hit CTRL+C after more than half an hour with no progress:

On the off chance it was a FreeBSD issue, I plugged it into my Mac laptop. Same effect: 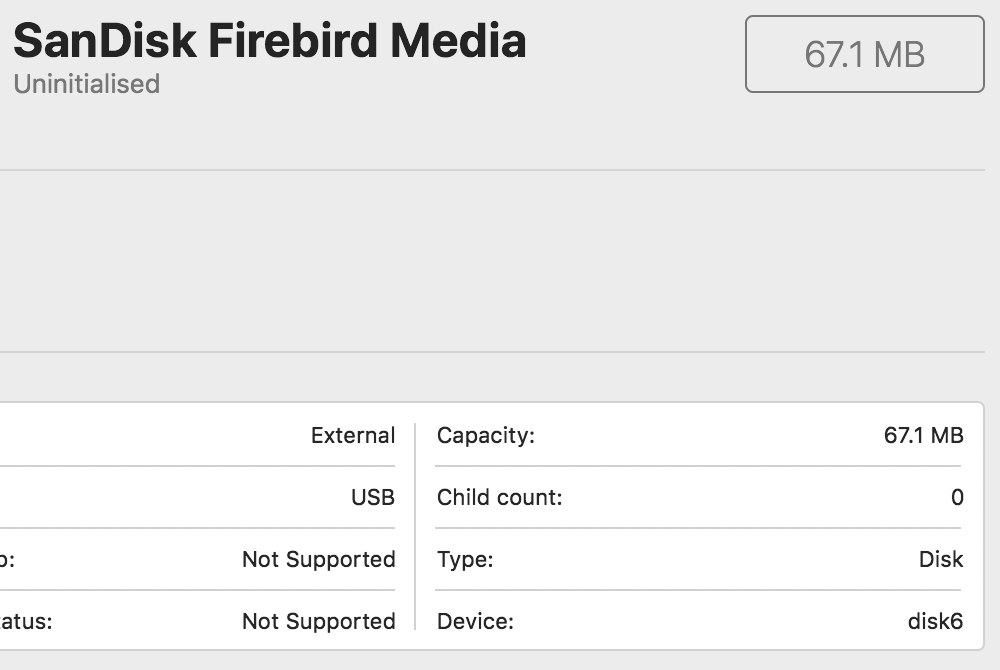 I’ve had keys formatted with exotic file systems, or GPT when a machine expects MBR, and whole drive encryption, and every combination of the above. But to be told the key itself only has a 64 MiB total capacity, as opposed to just its first file system, was surprising.

The plot thickens. After zero-ing out the first 64 MiB of this key, I plugged it into a USB-C port with an adaptor, and it came up as a 32 GiB key as expected, with a Mac partition table:

But disk4s2 couldn’t be mounted; presumably because I zero’d its MBR! Or was this key GPT, who knows? So I used diskutil(8) to create a new root MBR FAT32 partition:

The Finder now showed it as a 32 GiB key. But then I plugged it into my FreeBSD tower again, and dmesg(8) showed the key timing out when attempting to connect:

And when I plugged it back into my Mac, I immediately got the dreaded This disk is not initialised error, despite it formatting and mounting correctly before being ejected.

I’ve seen this error in the past with some USB 3.0 hardware, and the suggested solution from IRC or forums (I forget) is to add this to your /boot/loader.conf. But it didn’t help in this case, either because the key was USB 2.0, or there’s a hardware problem.

My gut feeling now is the key hardware itself is fried. I’ll keep it around for some experiments.