Cue Hitchhikers Guide to the Galaxy references regarding being too hip to see over your own pelvis ;).

For puppy paper (as we call it), nothing beats Saturday editions of newspapers. They're cheap, plentiful, and decently absorbent. For rags like the Straits Times and The Australian, I'd even go so far to say that its the best use for them! Unfortunately, you may be tempted to read some of the articles as you're placing them in on the floor for the doggies to do their business, which can lead to frustration and the urge to deride it either in public or your blog.

One such article was in the March 5th issue of The Australian that discussed how cool people are keeping the faith. The article was about evangelical protestant Christians of course, presumably because that's The Australian's readership base, because people of other faiths in multicultural Australia don't count, and because non believers such as atheists, agnostics or philosophical systems such as Buddhism aren't cool. Fair enough, I know I'm not hip in the slightest.

It could not have been more cliché and stereotypical if it tried. The author Christine Jackman crammed as many photos of young, super hip and trendy people on motorcycles and covered in tattoos as she could, along with this quote in bold:

To old school Christians, worshipping this way might seem a bit like serving up a cool Jesus with a side order of fries at a convenient and groovy drive-through.

I’m the James Dean of the Blogging Scene

Most of the "facts" in the report were derived from a four year old publication. If we're to believe census data, the makeup of religions in Australia is changing rapidly and data from even a couple of years ago is outdated, but we'll give them the benefit of the doubt.

In 2007, Singleton published The Spirit of Generation Y: Young People’s Spirituality in a Changing Australia with the Australian Catholic University’s Michael Mason and Ruth Webber […]

I remember a representative from the ACU came to our school in Singapore in year 12 to discuss why we should study at their institution. I asked if you had to be Catholic to join, to which I was told "no" because they "teach secular values", whatever that means. I suppose it wasn't entirely true after all, who'd have thunk it? ;).

What did the report say?

If spiritual health is measured by belief in God, then the news was dire.

Good thing spiritual health isn't measured by a belief in God. There's nothing stopping atheists, agnostics and other free thinkers from being spiritual. Teachings like Buddhism don't have Gods, and arguably they're far more in touch with their spiritual side than any of the Christian denominations the article discussed. Also, what about faiths such as Hinduism that worship more than one God? 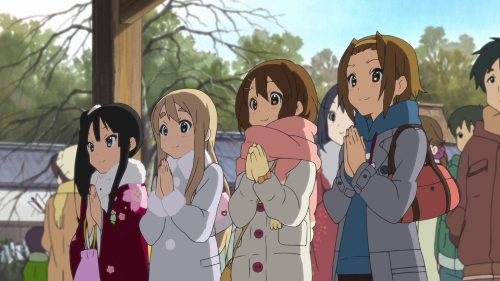 Nooooo! Not a Shinto shrine!

No, this article had nothing to do with keeping the faith and being ultra cool and super trendy about it, it was a several page long advertisement for the Hillsong Church/Gloria Jeans (thank you Alex for clearing that up!) and Australian Idol, who's winner Stan Walker graced one of the pages with his super trendy tattoos. Presumably he's unaware of Leviticus 19:28.

Sorry Australians, if you're religious but not Christian, or you're a Buddhist, or you're a free thinking atheist agnostic naturalist humanist Jedi or whatever you call yourself, you're spiritually unwell and worse still, you're not cool! I know right, this is serious!

I suggest you repent by hitching a ride on a motorcycle wearing a bandanna, and hit the drive through for some fries. No seafood though, that's not allowed either!