As American scientific chef extraordinaire Alton Brown always said, “don’t use a unitasker”. This idea can be fraught with peril in software, but I’ve come to internalise this so much in the physical world. Some examples: 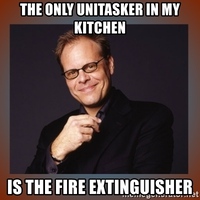 The key advantage of consolidation is fewer things to maintain for the same amount of output, which if done well translates to time and energy savings. This does mean you potentially lose more in one hit if there’s a problem, but the problem domain is smaller, and presumably you maintain it better because you spend more time with it.

So we come to smart watches. I wear a $20 quartz Casio with a white analogue face. It’s the best watch I’ve ever owned: it’s clear, it never needs charging, it weighs nothing, it has a tiny complication for the date, and it looks minimalistic. But now I’m looking at tracking fitness again, and every single wrist thingy today has a clock. I could wear both, but they have redundant information. I also prefer the Casio’s clock to anything on a fitness tracker.

I gave up on the original Apple Watch because the constant visual notifications and haptic vibrations did more to trigger my anxiety than any other technology I’ve ever owned. (Don’t email me with any suggestions, I tried them all).

So it does mean I’ll probably end up getting a separate device. But just like I feel guilty now when I buy more stuff, splitting a single device into two also feels wrong.