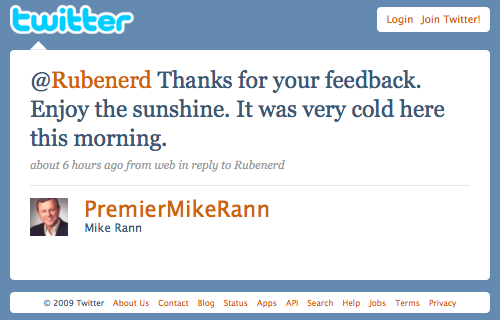 You remember back a few months ago when I said Twitter has been great for me to have conversations with people I'd probably would not have been able to have before?

Yesterday I sent a tweet to South Australia's Premier Mike Rann him about an unlikely gathering of Aussies and Kiwis at a Starbucks here in Singapore and that surprisingly of all the premiers he was the only one people could name, and had positive things to say! Granted most of the time we spent talking about how the Victorian Premier and the Melbourne Lord Mayor were bagging out South Australia and how Mike took the high road in response, but it's the principal that counts right?

Even if you don't like Mike (or call him Media Mike or another such cliché) it's still cool to get direct feedback from him like this.

In the meantime, I'll be back in Adelaide next month, seems like I'll need to pack some warmer clothes again!