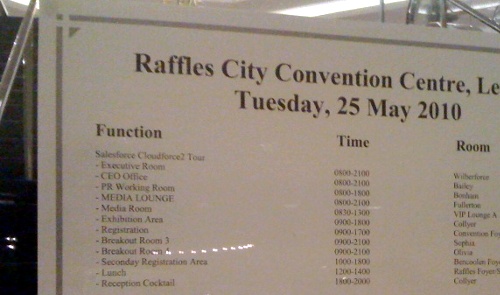 I must admit a certain level of professional ignorance when it comes to cloud computing; much of my own commentary on the subject has been limited to security problems and my general anger with the way sites like Facebook have abused their users. It was refreshing to see some good stuff :).

I almost went to it!

Its one thing to feel frustration when you can’t attend an event on the other side of the planet, it’s quite another to know the CEO of SalesForce is hosting CloudForce Singapore less than two kilometers from your house and you didn’t register in time to attend! As usual I found about the event on Twitter but it was too late.

Instead I opted to watch the webcast as I done so many times with events like this that previously I couldn’t attend because of geographic isolation, and fortunately there were plenty of friendly people on Twitter discussing the events and ideas; I even met a few new people. That whole sentence could have been phrased better.

It’s almost become a journalistic cliche to compare every keynote speech with Stevenotes, but I’m neither a journalist nor am I worried about cliches ;)

Steve Jobs does such an amazing job building buzz and with the delivery of his Stevenotes, partly due to the cult of personality surrounding him and his mysterious company, but mostly for a reason I think most people miss: he takes the time to explain why his company is developing things and not just what.

SalesForce’s CEO Mark Benioff was such a treat to watch for the same reason, instead of discussing a dry list of features he explained throughout the presentation why he was doing things while being refreshingly humble and candid. Enterprise software tools from Lotus, Microsoft, Siebel and Oracle are limiting and not enjoyable for people to use (both my father and I have personal experience!) Why can’t enterprise software act more like Facebook or Twitter which people are flocking to in droves and are using to answer questions instead of asking support teams? 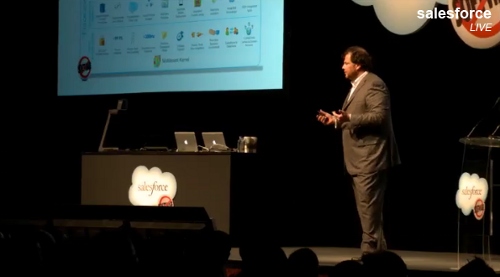 Forgive the use of weasel words and general awe and glow with these nest few paragraphs, I only just finished watching the keynote and am still in awe!

Cloud 2 and Chatter looked phenomenal, particularly when they were demonstrated live through their Singapore data centres throughout the talk. Much of the interface was deliberately designed to resemble social networks that people are (according to them) now in more common use than email as of 2009! Not only was it internal to SalesForce, but it even made it possible for the likes of support technicians to reply via Twitter.

I could see people wanting to use these services instead of being forced to, which in itself could drastically change how people communicate in businesses. The difference between feeling compelled to use something and being forced to is something most business software vendors seem to have been either blissfully ignorant of, or haven’t cared because they’re too busy worrying about what they look like on paper or for the developers who’d be implementing it. 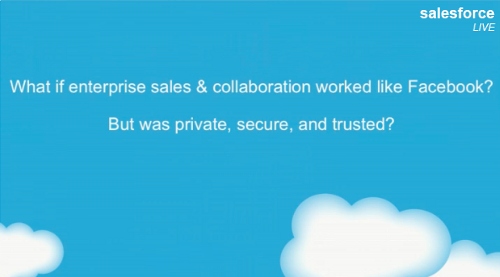 To me one of the more salient points made was that while Facebook in particular is a compelling platform, it lacked privacy, security and trust which limited its future growth and use in enterprise and SMBs environments. If I were using their services I’d be adopting a wait-and-see approach initially, but if SalesForce can deliver on these promises I could even see it putting pressure on sites like Facebook. Not necessarily in competing with users, but with attitudes.

I also liked their demonstration of being able to change the entire interface into foreign languages without any extra work, and using Simplified Chinese in their example (this being Singapore and all). Xie xie :)

I must admit I enjoyed the many playful jokes Marc made at the expense of Microsoft such as explaining the reason why he used an iPad was because a Microsoft tablet wouldn’t work, or to Google’s Singh that he felt no need or want to upgrade expensive Office suites every few years; even going as far as to call their cloud computing efforts merely a half arsed, last gasp attempt to remain relevant and as a stepping stone between their past and the future.

To highlight the cross platform nature of Cloud2 and Chatter in particular, he made use (to put it mildly!) of iPads, iPhones and a BlackBerry showing information and photos being transferred in real time regardless of where it was coming from. A few people on Twitter seemed angry that he’d lambast Microsoft and do advertising for Apple, Marc even saying that it goes against their message as being platform agnostic. Personally I saw it as using the best platforms available, which can be done because they’re platform agnostic, and as he answered in the Q&A he did show his BlackBerry too. 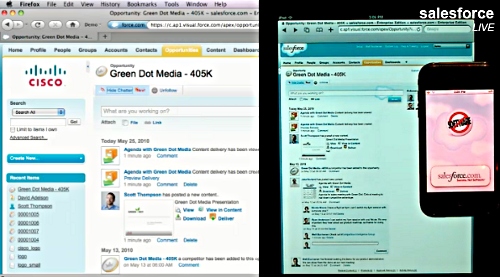 Forgive the terrible grammar and long, convoluted sentences, I wrote this just as the keynote ended and I wanted to get all my ideas down before I started forgetting stuff. If this were going into a magazine column or a blog network, no doubt I’d be fired. Heck, that’s why I don’t do either, right? ;).

I tell you what though, this whole talk was a fantastic advertisement for SalesForce, I’ve been rather apathetic with cloud computing but now I want to check it out and start developing on it! Well, once I’ve got all my Django and ncurses stuff done. Gosh darn it, why does there have to be so many interesting things to study now!? 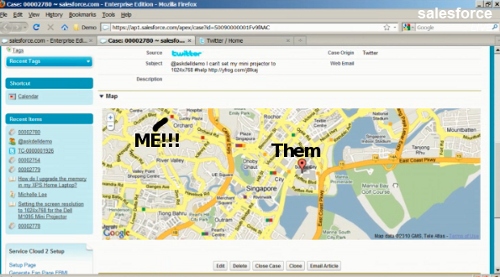 I wonder what Mitch Kapor thinks of Chatter?