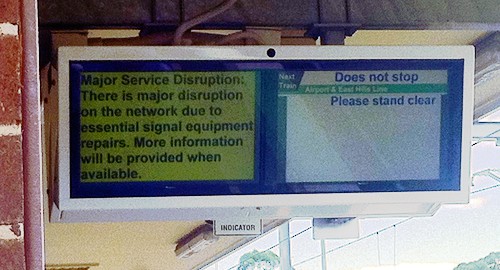 It was a good thing I didn't need to go into uni today given two dreaded words from CityRail: Major Delays.

Apoliogies for the crappiness of the picture, I took it with my iTelephone with HDR in broad daylight with the sun shining directly on the displays. Only by distorting it like this did the words become readable!

Let me tell you a tale

Since I was young enough to venture out into this big world by myself, I've preferred trains to buses. They're infinitely smoother, quieter, I can read on them without getting car sickness, and given the direction of their travel is fixed I feel safter knowing the driver won't suddently change course or decide to take me somewhere different. I'm a terribly socially awkward person you see, so anything to reduce the number of variables when I'm in that giant room with the blue ceiling is welcome.

While all that is true (at least in my opinion) they're certainly no less or more reliable than buses. While I've had my fair share of bus breakdowns, trains in Sydney especially seem to have a mind of their own. We can't go for a month or two without some form of trackwork, and sudden disruptions because of reason XYZ.

The Tale… of Alan A’Dale

Today's disruption was due to "signal equipment repairs", and it wasn't planned. Turns out due to a fault in the signaling systems, commuters across the network (including on our line) suddently found their trains not moving for over an hour; would have been wickidly fun if you were trapped underground for that time period.

On the surface, my fellow train travellers and I watched the time tick by while we waited for trains, all the while with this sign on the electonic notification screen thingy:

Major Service Disruption: There is major disruption on the network due to essential signal equipment repairs. More information will be provided when available.

Jacob Saulwick from The Sydney Morning Herald had this to say:

YESTERDAY was one of the worst days on Sydney’s train system for six years, triggered by multiple signal failures during the morning peak hour at a critical junction on the network.

The problems started at 7.40am when two signalling systems at Sydenham control centre stopped working.

Trains on the Bankstown, Inner West, South, Airport, East Hills, Eastern Suburbs and Illawarra lines were immediately brought to a halt; some at platforms, some stuck between platforms.

And if you want to see some incredible pictures, this article by Georgina Robinson has them. Wow, just wow.

The phew is the flew

So I went to our local station to take that terrible picture, then came back home again to keep working on my assignments and whatnot. Glad I didn't have to commute today, that's for sure.

Hey Barry O'Farrell, weren't you going to fix this?