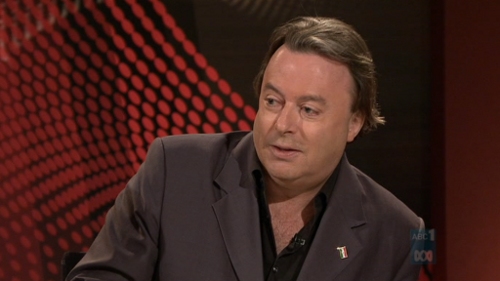 In a world where it's taboo to criticise religious figures and dogma that claim to know and represent all while rendering women subservient, homosexuals evil, safe sex in AIDS-torn countries unattainable, repression of minority groups acceptable, and holding back of ethical, scientific and medical progress as a virtue with faith, Christopher Hitchens was one of the precious few throughout history to stand up and shout "that's enough".

At times we didn't see eye to eye, but I harbored a deep respect for The Hitch, and unashamedly reveled in witnessing him deconstruct arguments leveled against him with honesty, passion, wit, and a memory for facts and quotes that rendered his logical arguments unassailable. Love him or hate him, but you could never ignore him.

"The only known cure for poverty is the empowerment of women"

Here's to you Mr Hitchens, you glorious bastard. Thank you for teaching us to think in the face of those who would deny us the privilege, that we need no celestial oversight to lead rich, meaningful lives, and to treasure this one shot we'll have on this planet. You'll be missed.

“Take the risk of thinking for yourself, much more happiness, truth, beauty, and wisdom will come to you that way.” The first photo is from Christopher's appearance on Australia's QandA programme in 2009, which I blogged about at the time. The second photo is my own personal stash of Hitch, complete with an interview from the Sydney Morning Herald last year about his declining health and views on the universe.